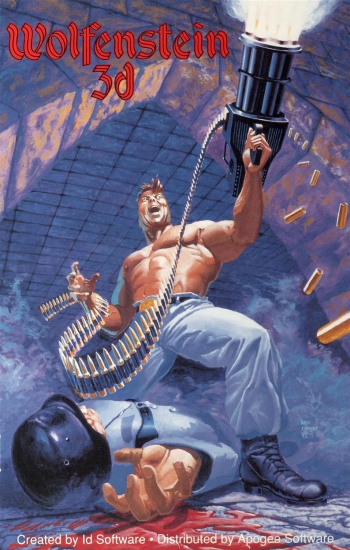 Whether or not you ever played an ASCII game on a BBS, if you’ve been playing games for a few years, you’re probably familiar with some of these classics.

Helping to popularize the FPS genre, Wolfenstein 3D introduced the world to renowned badass B.J. Blazkowicz way back in 1992. Shareware was all the rage, the 486 processors were getting to be affordable, and memory was still at a premium. Wolfenstein 3D was amazing on the 486 in my father’s basement, but it only required a 286 processor to run. Amazingly, it needed only 500k of memory and 8MB HDD space for the full install. That’s roughly the size of just one of my wedding pictures.

The Wolfenstein franchise, which began in 1981 with Castle Wolfenstein, had a bit of a lull after 3D, but picked up steam again in the early 2000s with Return to Castle Wolfenstein. There are a total of nine titles in the series, with the most recent being The New Order, which takes B.J. to an alternate 1960s where the Nazis won the war and took over the world. The mechanics in The New Order are quite similar to those of 3D, despite the FPS genre having moved away from health and armor pickups. In fact, you can even play a game of Wolfenstein 3D by resting in a bed in your hideout in The New Order. 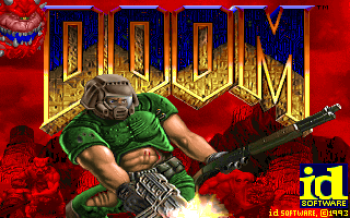 Hot on the heels of Wolfenstein 3D was id Software’s 1993 sci-fi horror shooter, and arguably one of the best known video games ever, Doom. Releasing only a year after Wolfenstein 3D, the system requirements took a huge leap forward requiring a 386 processor and eight times the RAM required for its predecessor, a whopping 4MB. Legendary developer John Carmack -now working on making viable VR technology with Oculus – created the idTech 1 engine the game uses, otherwise known as Doom engine.

Despite the fact that almost every enemy in the game is a literal demon from hell, interest groups rallied together against the ultra violence inherent in the genre and so began the frequently-debunked myth that violent games lead to violent behavior. In fact, these groups even tried to blame the tragic Columbine shooting – something that happened a full six years after the release of Doom– on the game.

While Wolfenstein 3D started moving the gaming audience towards the FPS genre, Doom sealed the deal, truly popularizing it. It was also the birthplace of gaming’s most amazing weapon, the BFG 9000. 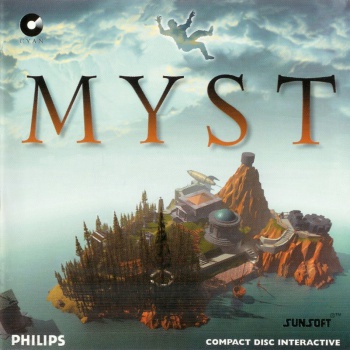 You can’t talk about gaming in the ’90s without talking about Cyan’s 1993 smash hit, Myst. That’s no hyperbole either, as Myst was the best-selling PC game for almost a decade, until people started finding creative ways to murder their virtual families in The Sims, which finally outsold Myst two years after its 2000 launch. That’s a fairly impressive feat for a game that ran on a 386 with 4MB of RAM. I remember fawning over the graphics at the time, although I’ll admit that I didn’t have the persistence at 11 years old to actually beat the game on my own. Thankfully, my favorite BBS (Sort of a predecessor of the Internet, for those of you born after ’85 or so.) hosted an in-depth text-only guide which helped me through the trouble spots.

Being a slower-paced game than shooters like Doom, Myst focused heavily on immersive graphics, which you actually took time to appreciate and marvel at as you pounded your head against the desk trying to make the requisite leap of logic to solve one of the more esoteric puzzles. Myst‘s surprise success launched a franchise that persevered until 2005 with Myst V: End of Ages.

Unlike previous titles on the list, 1998 strategy hit StarCraft was far from being the first RTS on the market. In fact, StarCraft developer Blizzard had already put out two games in the WarCraft series, which made Blizzard’s presence on the RTS scene known. All the same, StarCraft has largely become the poster child of the genre, and established a huge international following, as well as being considered one of the best video games ever.

What made StarCraft special was the fact that it offered three distinct, yet fairly balanced races to choose from, rather than offering only two sides, which often mirrored each other. This, alongside the multiplayer, is what really made StarCraft stand out to players and critics alike. Requiring a blisteringly fast 90MHz Pentium processor and a staggering 16MB of RAM, StarCraft is hands down the most demanding of the games on the list, which is no surprise, really, given that you could amass armies of dozens to hundreds of Zerglings on screen simultaneously.

If you’ve ever wondered what the origins of the colloquial verb “zerg” are, look no further. The Zerg race was known for producing many cheap, underpowered units, which, when attacking en masse, could simply overrun an unprepared enemy. Playing StarCraft online taught you very quickly that you had to be prepared for a zerg rush in virtually every match. 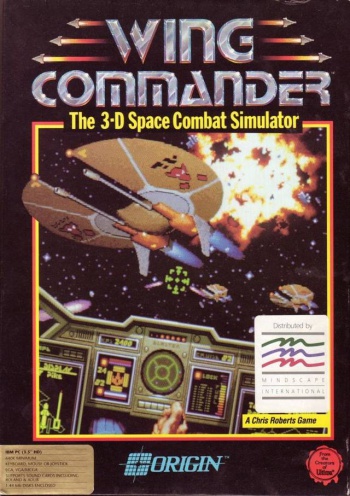 Wing Commander was to space-based combat flight simulators what StarCraft was to the RTS genre. There’d been many of them before Wing Commander ever saw the light of day, but it was so well done that it helped forge a future for the entire genre. It was so good, in fact, that Dragon magazine gave it six stars. Dragon magazine used a five-star system.

So big was the Wing Commander fad that, after its debut in 1990, it was released to SNES, Sega CD, 3DO and PlayStation, among others. Wing Commander was also one of the first video games to be produced by now-renowned Warren Spector. It even featured some of the branching plot lines that Spector is so well known for. If a player performs poorly, the missions turn defensive, eventually resulting in the retreat of the player’s mother ship, Tiger’s Claw.

With Oculus VR technology on the horizon, it’s no wonder that games like Star Citizen and Elite: Dangerous are looking to bring us back to space. A three-minute demo of EVE Valkyrie illustrates brilliantly just how well this genre lends itself to an immersive VR experience, and the future of space combat sims will almost certainly be played with a headset.

What games do you think helped define the ’90s? Let us know in the comments below.