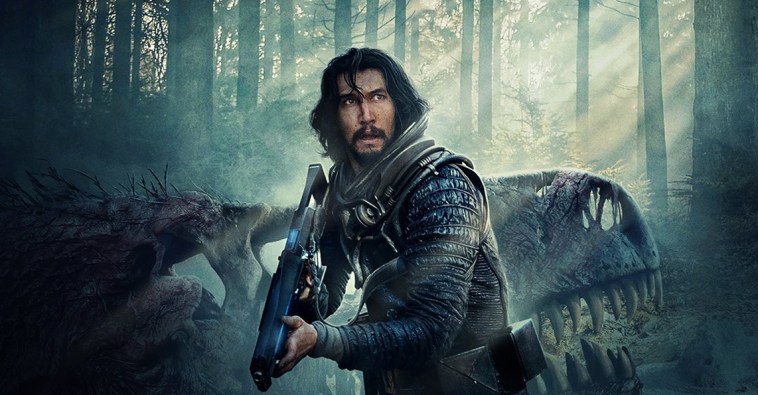 Adam Driver is a really good actor, and for the most part, he gets cast in roles that utilize his wide-ranging acting talents. However, his next movie, 65, asks an important question that you’ve probably never thought of: What if instead of Adam Driver playing a challenging role, we just had Adam Driver shoot dinosaurs with a future gun from the future? The first 65 movie trailer gives us a glimpse at what the answer to that question is.

65 may seem like the premise of a budget movie made by the same studio that puts out the Sharknado films, but it, in fact, has quite the creative team behind it and is coming from Sony. The film is produced by Sam Raimi and is written and directed by Scott Beck and Bryan Woods, who wrote A Quite Place. The horror influences of the creative team are incredibly clear throughout the trailer, but make no mistake — this one is looking to be a big action film. Driver plays Mills, a space pilot who crash lands on an unknown planet after his ship, carrying deep-space passengers, is hit by asteroids. After finding the only other survivor is a little girl named Koa (Ariana Greenblatt) he makes the shocking discovery that they haven’t landed on an alien planet at all, but on Earth 65 million years in the past. The dinosaurs do not want them there, and his cool gun seems to be running out of ammo.

Look, this one isn’t high art. Man versus dinosaur has been a cheesy film topic for ages, but it looks like an absolute blast and putting Driver into the lead role does somehow add just a bit more gravitas to the whole thing. Like maybe the dinosaurs are going through a really bad divorce and that’s why they’re so grumpy, or maybe his soul is magically connected to the girl or maybe there’s some weird family dynamic to dive really deep into between him and Kai that’s going to sideline the dinosaur action for half the runtime. OK, probably not. It’ll probably just be Driver and Greenblatt running around shooting at dinosaurs, and that is exactly what it should be. However, there will be at least one more person (or maybe a ship computer’s voice) showing up as Chloe Coleman is listed in the cast.