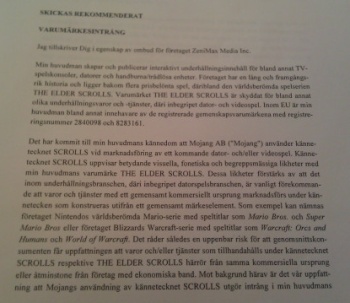 Lawyers from Bethesda Softworks claim that Scrolls, the new game from Minecraft studio Mojang, infringes upon its Elder Scrolls trademark.

There’s not a lot of meat on this bone, but here’s what we know about the situation so far. Earlier this morning, Minecraft creator Markus “Notch” Persson tweeted, “Just got a letter from Bethesda’s lawyers. They claim ‘Scrolls’ infringes on their trademark and everyone will confuse it with Skyrim.”

It had the ring of an odd joke, but awhile later Notch seemed to confirm that he was indeed serious, following up with a second tweet saying, “I still <3 Bethesda. This is hopefully just lawyers being lawyers.” He also posted a photo of the 15-page letter he received from the publisher as proof that he’s not just pulling a bizarre prank.

Bethesda hasn’t responded to our request for comment but it did tell PC Gamer that it has “no comment at this time.” Notch hasn’t said anything more on the matter either, although he did note that “At least I know what to call the floaty island dimension now!”

My hope is that this is just somebody in Bethsoft’s legal department getting a little overzealous – “just lawyers being lawyers,” as Notch put it. We’ll keep you posted!

Harmony of a Hunter: Celebrating 25 Years of Metroid