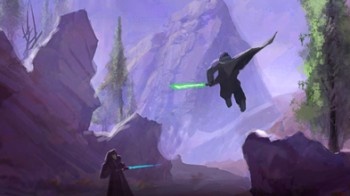 EA announced its intentions to merge its RPG divisions – most prominently including Mythic and BioWare – under a single RPG/MMO banner helmed by BioWare founder Ray Muzyka. Longtime Mythic boss Mark Jacobs, on the other hand, is leaving.

According to the post on the official Warhammer Online: Age of Reckoning site, Jacobs – founder and CEO of Mythic Entertainment – left the company yesterday, June 23rd. The other Mythic co-founder, Rob Denton, will be stepping up to fill Jacobs’ spot as head honcho.

Denton, though, will now be reporting to BioWare co-founder Dr. Ray Muzyka as part of EA’s new RPG/MMO-focused megastudio umbrella. The announcement only mentions Mythic and BioWare by name, though the particular wording refers to “a new group that includes both Mythic and BioWare” (emphasis mine,) so one can assume that there will be other, smaller studios included in the merger as well.

Boy, there’s so much you could potentially read into this. Did Jacobs leave of his own accord, or was this a “We’re not entirely happy with you, please leave” move from an EA unhappy with how WAR was faring? Sure, 300,000 subscribers isn’t exactly lighting the world on fire, but it’s perfectly reasonable and sustainable from an MMOG these days.

At any rate, merging a longtime MMOG developer with a well-known and respected RPG studio (currently developing one of the most highly-anticipated MMOGs in recent memory) is a pretty high-profile move for EA. So, what do you all think? Is this EA kicking things into high gear for a head-to-head confrontation with Blizzard’s World of Warcraft? Is this the death knell for the single-player RPG?

Feel free to freak out and speculate wildly. I mean, that’s half the fun.

Update: Not much of an update here, to be honest – an EA rep got back to us and pretty much confirmed what we knew: “Mythic and BioWare are grouped together into a new RPG/MMO studio group, led by Ray Muzyka, but will continue to operate as two teams. Nothing changes in the day-to-day roles and responsibilities of the dev teams.”