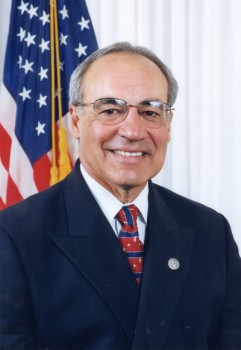 California Congressman Joe Baca has once again introduced legislation that would require special warning labels about the dangers of videogames on all games rated higher than EC (Early Childhood).

You may recall Congressman Joe Baca as the guy who introduced legislation calling for “health warning” labels on videogames in 2009, and then again in 2011. He also went nuts when the Supreme Court of the United States affirmed First Amendment protections for videogames, saying it gave the industry carte blanche to “profit from selling heinous depictions of violence and sex to minors.” And now he’s back, trying once more to force the addition of warning labels to videogame packaging.

Introduced on Monday, Baca’s third kick at the can is H.R. 4204, the Violence in Video Games Labeling Act, which would mandate that games rated E (Everyone) or higher carry a label reading, “WARNING: Exposure to violent video games has been linked to aggressive behavior.”

“The videogame industry has a responsibility to parents, families, and to consumers – to inform them of the potentially damaging content that is often found in their products,” Baca said in a statement. “They have repeatedly failed to live up to this responsibility. Meanwhile research continues to show that playing violent videogames is a casual [sic] risk factor for a host of detrimental effects in both the short- and long-term, including increasing the likelihood of physically aggressive behavior. American families deserve to know the truth about these potentially dangerous products.”

The statement said that “recent studies from the Pediatrics Journal, the American Psychological Association, and the International Society for Research on Aggression University of Indiana all point to a link between playing violent videogames and aggressive behavior in children and teenagers.” Rep. Frank Wolf, the bill’s co-sponsor, added that parents and children alike need to be made aware of the “growing scientific evidence demonstrating a relationship between violent videogames and violent behavior.”

I’m not actually aware of any growing body of evidence linking violent videogames with violent behavior; there are studies that do, and studies that don’t, and at least one meta-study that says the studies that do are more sound and reliable than those than don’t. Either way, the indisputable fact is that over the past 20 years, during which videogames have grown to become the most popular entertainment medium on the planet, violent crime in the U.S., which one would reasonably assume would show a corresponding spike due to the expected uptick in violent behavior, has actually decreased.