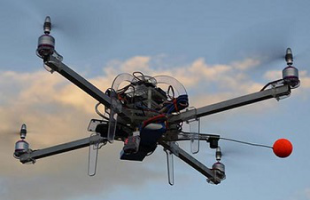 Starting small, China’s new system has a 1.2-mile range, can hit targets traveing at speeds of up to 100 mph.

Drone hobbyists, beware! China is coming for your precious quadcopters.

The Chinese military has a new laser-based drone defense system in place, which it will use to “[ensure] security during major events in urban areas.” Where’s the talk about melting Predator drones flying miles above the Earth? Well, China isn’t quite there just yet.

Instead, the new defense system is small-scale, focusing on keeping low-flying drones out of restricted areas, maintaining clear skies during public events, and combating the (apparent) issue of “unlicensed mapping activities.”

The range of the laser battery is 1.2 miles, it can be operated within roughly 1,600 feet of the base installation, and the system can target drones traveling up to 100 miles per hour. This means your precious Parrot AR Drone is in peril, while the Predators and RQ-170 Sentinels flying at 30,000-50,000 feet are safe and sound.

The new system, which can be mounted to a vehicle, or installed at a permanent installation, has taken down 30 small drones with a 100 percent success rate.

While China focuses on the overly ambitious drone hobbyist, Lockheed Martin is happy with its business jet-turned-face melting laser plane. Of course the China Academy of Engineering Physics, one of the bodies behind the new system, is working on larger-scale systems as well.

Loki Will Be in Avengers: Age of Ultron