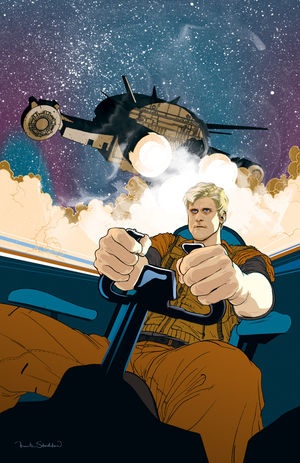 Patton Oswalt is tackling the past of Firefly‘s Wash in a comic book set to be released within the next few weeks.

Many fans of Joss Whedon’s sci-fi television show Firefly, and associated movie Serenity, might still be pretty angry about the cancellation of the truly awesome show, but at least it continues to live on through comic books. The next extension of the Firefly universe will be comedian Patton Oswalt’s Serenity: Float Out, set to hit comic book store shelves on June 2.

**Spoiler Warning: If you haven’t seen Serenity a key occurrence will be spoiled in the rest of this post**

A preview of the book is over on io9. Patton Oswalt has penned a few comic book stories before so he’s not a total noob here, plus he’s a huge Firefly fan.

Float Out covers three tales of Hoban “Wash” Washburne, the pilot of Firefly‘s ship Serenity, before he was killed in the Serenity movie. That was the spoiler right there. Float Out is told through three old friends of Wash not met before in the series. As they christen a new ship and name it the Jet Wash after the deceased pilot, they tell harrowing tales of Wash’s pre-Firefly exploits.

The Dark Horse Comics description of Float Out says: “Featuring a cameo that will leave Serenity fans reeling, this special one-shot presents new tales of the Serenity universe’s past and tantalizing hints about its future!” Does this mean it will somehow lead in to the finally revealed secrets of Shepard Book coming in November? Either way I’ll be camping outside my local comic book store on June 2.

George Romero’s App of The Dead Shambles Onto iPhone