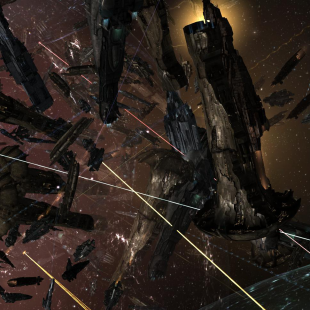 A huge battle between the N3 Coalition and CFC is raging after an N3 Coalition alliance missed a bill payment and left some territory vulnerable.

I will admit to having never played EVE Online. It’s not that I haven’t tried, it’s just that the last time I did my laptop almost burst into flames from the effort. For real, you could have cooked eggs on it. My insufficient hardware aside, I’m nothing if not one who appreciates a truly epic space battle and, as time has proven again and again, EVE is often a hotbed for virtual conflict. For instance, in the real world a missed bill isn’t much cause for alarm. You write a check and maybe get a bit of a late fee. In EVE Online, however, missing a payment can apparently lead to an interstellar battle of epic proportions.

According to CCP, the current engagement being fought in the system B-R5RB began when “an alliance in the N3 Coalition missed a bill payment for the system where Pandemic Legion is staging and storing their fleets.” As a result “sovereignty [dropped] across the system leaving the station vulnerable.” Sniffing out an opportunity, the CFC and the Russian Coalition moved in and captured the station. The subsequent fighting has apparently been pretty nasty with several trillion ISK worth of material lost. It has also, according to CCP’s Ned Coker, resulted in the destruction of around 20 Titan warships “with more to come as the US timezone comes home from work.”

While I fear that I’ll probably never step into the arena of EVE Online myself, it’s hard not to appreciate its intricate web of politics and alliances and how they can, in the blink of an eye, lead to situations where epic battle such as this can occur. Put shortly, it’s fascinating to watch, even if the battle is being slowed down by in-game time dilation to make it more manageable for servers.