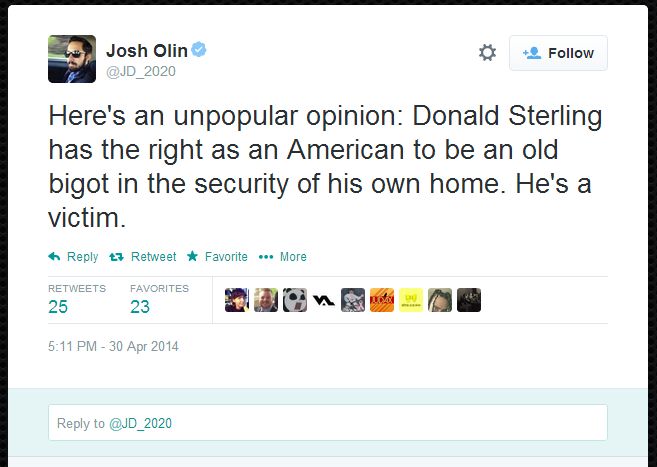 Acknowledging it as an unpopular opinion, Turtle Rock’s Josh Olin calls the banned owner of the Los Angeles Clippers a victim.

Update: Turtle Rock Studios has apparently removed Olin from his position as community manager as a result of his statement. “The comments made by our former community manager stand in stark contrast to our values as a game development studio,” the studio tweeted earlier this evening. “We sincerely apologize for his remarks and in no way endorse or support those views.”

In his own follow-up tweets posted after he was removed, Olin wrote, “I’ll remind you, my remarks were in condemnation of sensational media, and support of one’s privacy. Not in support of Sterling’s actions… Final thoughts: I believe in racial equality & do not endorse bigotry in any way. I also believe in free speech and decry sensational media.”

Anyone who follows sports, especially NBA basketball, has been aware of the bigoted utterances of Los Angeles Clippers owner Donald Sterling, and the subsequent lifetime ban from the game by NBA Commissioner Adam Silver. However, the topic is far from dead, and at least one member of the game community has publicly come out to defend the man as a “victim.”

Josh Olin is manager of the community and eSports team at developer Turtle Rock, which is making the sci-fi shooter Evolve. What makes this interesting is that his tweet is so out of bounds from the video game business (unless it was an NBA sports game), and a topic one would probably not expect to see from someone that deals with the community on a regular basis.

Olin’s comments of Sterling as a victim seem to stem from the recording of the Clippers’ owner’s comments in the supposed privacy of his home. Forget for a moment that Olin is commenting on Sterling at all, but just a controversial topic outside the scope of his official duties. That seems to be a borderline issue between Olin and Turtle Rock, and any HR policies the company may have on such public comments.

Now, bring in the context of Sterling and his bigotry and Olin’s perceived defense of the man, and Turtle Rock may be facing an issue similar to the NBA. The tweet, as of this posting, has been retweeted 25 times, and Olin has more than 142,000 followers. Of course, this is Olin’s personal account, not a Turtle Rock one, but again, as the NBA showed, if personal feelings spoken in your home can get you banned for life, is there any difference of a public comment from your private account?

Everyone is entitled to express their opinion as part of the First Amendment, but at what point does that freedom of speech become a PR nightmare for the company said individual works for? The First Amendment allows you to say whatever you want without fear of arrest, but it does not guarantee you exemption from the ramifications those comments may bring from employers or other associations.

While I see (but don’t agree with) Olin’s point of view, and at the same time abhor Sterling’s bigotry, the tweet poses an interesting dilemma worth following.