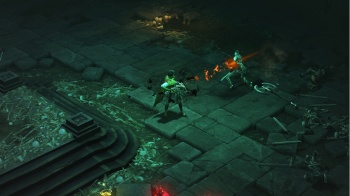 Get an electric boyfriend if yours is busy adventuring.

In case you missed it, Diablo III came out this week. Sort of. But as the inevitable server issues inevitably get sorted out and the game becomes playable in its brilliant and addictive glory, there will always be those left behind in the real world as we venture into the Burning Hells.

French sex toy website Absoloo then had a brilliant idea: Surely there would be tons of women whose boyfriends and husbands were too consumed with Diablo to fulfill their carnal need, so why not give them something to do the trick in the meantime?

While I think this is an absolutely brilliant marketing stunt, I do have some problems with it. For one, I know a ton of women who are themselves playing D3, whether solo or with their significant others. Would they still be eligible? An Absoloo representative did clarify that the “small” vibrators were “not exclusively for girls,” so one could imagine that Diablo III widowers could get in on the action too.

For another – how is Absoloo going to make any money off of this? It’s fantastic publicity, but it’s also going to be giving away hundreds if not thousands of dollars of merchandise, since it’s not exactly difficult to take a picture with the game (or a screenshot for the digital version), even if it’s not yours. I guess it could always be shooting for the “repeat customer” market, though.

Either way, this is genius and hilarious. If only we lived in France. Merde.