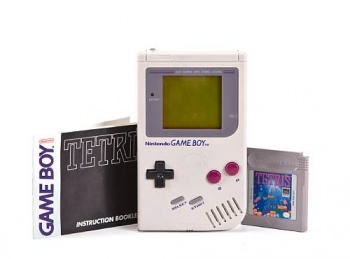 In space, no one can hear you play Tetris.

The humble Game Boy was a curious beast: It wasn’t the prettiest, or most powerful handheld around, but everyone loved it, including Russian cosmonaut Aleksandr A. Serebrov, who took his Game Boy with him during his nearly 200-day stint on the Mir space station. Even better, this one-of-a-kind handheld is going up for auction, so it can be yours if you have a couple of thousand dollars lying around.

Serebrov went up in the Soyuz TM-17 in 1993, and played Tetris – a rather appropriate game for a Russian cosmonaut – in what little leisure time he got. Back in 1994, in his autographed provenance note, he wrote. “Like all cosmonauts, I love sport. My particular favorites are football and swimming. During flight, in rare minutes of leisure, I enjoyed playing Game Boy.” The Game Boy has spent 196 days in space and orbited the Earth over 3,000 times. The Game Boy is lot 250 of auction house Bonham’s “Space History Sale.” The auction starts on Thursday, with 250 lots available. It’s estimated that it will fetch between $1,500 and $2,000.

If you’re interested in space, there’s plenty of other lots that might catch your eye, from the tag that the first monkey that the US shot into space wore around his neck, to Soviet posters from the 60s. The auction is based at Bonhams’ New York branch, but you can also bid online if something catches your eye. You can look at all the lots here.