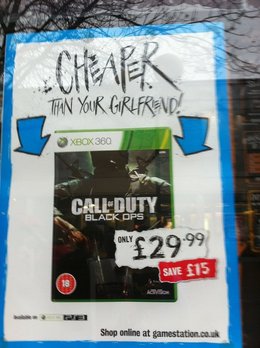 U.K. retailer Game defended Gamestation marketing as “slightly edgy and occasionally controversial” after one of its own employees complained that a new advertising campaign is “openly sexist.”

A new Gamestation advertisement offering pre-owned games at prices “cheaper than your girlfriend” has attracted the ire of an anonymous female employee, who wrote to GamesIndustry.biz to complain. “I agree Gamestation should target a more core audience than Game, but I just don’t see what this slogan has to add to their campaign or to gaming in general,” she said.

“It is pretty openly sexist – girls being cheap, obviously, but it’s also pandering to the old stereotype that gamers are guys,” she continued. “And of course any discrimination is banned by Game’s own employee regulations, so I don’t see why the company itself should be able to get away with it.”

But Neil Ashurst, the head of public relations at Game, which bought out Gamestation in 2007, said the ad may be edgy but simply reflects the realities of gamer demographics. “We welcome everyone into our stores and the Gamestation brand reflects its customer base which is still predominantly the traditional core male gamer,” he explained. “Our marketing and in-store POS does, and will continue to, appeal to that audience. Throughout its existence, Gamestation has always been slightly edgy and occasionally controversial. Our customers love this about us.”

The employee who complained said the response was “a bit of a cop-out” but not terribly surprising. “I appreciate Gamestation’s style,” she added. “But I don’t appreciate them making me feel I’m not who they think should be buying their products.”