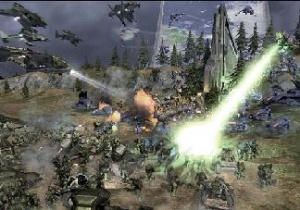 The recently released Strategic Options DLC for Halo Wars is being blasted by fans on the Halo Wars forums for being light on content and “overpriced.”

The Strategic Options DLC has come under scrutiny from fans primarily because of its high cost at 800 MS Points ($10), and relatively small 2MB download size. The small file size fuels arguments from angry gamers who feel developers are not creating new content but instead simply selling them keys to unlock content already on the disc.

The DLC features three new game modes – Tug of War, Reinforcements, and Keepaway – and 100 Gamerscore points’ worth ofAchievements. Another complaint stems from the fact that only one of the new game modes is single-player compatible; Tug of War and Reinforcements require multiple players to play, while only Keepaway has single player functionality.

Dave Pottinger, Lead Designer of Halo Wars responded to the small download size complaint on the official forums under his moniker “Godgib”:

“None of the DLC was on the disc when it shipped. The game modes are a small download because they are rules. There is some new content, but it’s obviously a different type of content compared to a map.”

What exactly this “different type of content” entails aside from minor changes to the games rules and AI parameters is hazy. Without new maps or units or something a little more substantial, 800 MS Points seems like a steep price to pay for 2MB.