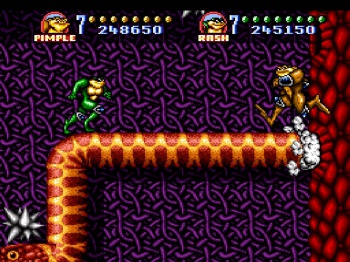 Rare’s brutally difficult beat-em-up Battletoads might be making a comeback.

The next retro game to make a modern-day appearance could be Rare’s Battletoads, according to a recent trademark filing by Microsoft. The console-maker filed a trademark for Rare’s classic beat-em-up for “entertainment services, namely, providing online video games” on November 5, which was discovered by NeoGAF earlier today.

This isn’t the first hint that Battletoads was set to make a comeback; six years ago, Rare’s Banjo Kazooie: Nuts and Bolts (itself an older franchise revived by Microsoft) teased the return of the developer’s other franchises. A secret section in the game revealed the note, “They’re all in the pipeline, you know. New Killer Instinct, Battletoads, and Jet Force Gemini games. Even Ghoulies 2! Oh, you’ll never believe that.” While I don’t necessarily think a Grabbed by the Ghoulies sequel is in the works, those claims clearly aren’t outrageous or outdated–a new Killer Instinct was released just last year. Who knows? Maybe the time is right for Battletoads to make an appearance on modern consoles.

Battletoads was released for the NES in 1991; it was followed by an arcade game, a Canadian cartoon show, and a Double Dragon crossover, to name a few, before the series fizzled out in the mid-90s. Rare was acquired by Microsoft in 2002 and is now one of the publisher’s first party developers, cranking out titles like the adorable Viva Pinata, Kinect Sports, and the Xbox One launch title Killer Instinct. Though the Rare of today only vaguely resembles the developer of 20 years ago, perhaps reviving one of its most infamous titles will yield promising results. Then again, it could also cause entirely new generations of siblings to fight each other over cheap deaths and stolen weapons.