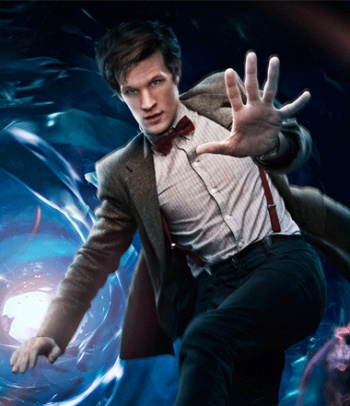 Doctor Who’s head honcho Steven Moffat has let a few juicy details slip about what we can expect in the new season.

Doctor Who returns to our screens this April, and it’s all change in the TARDIS. New man in charge Steven Moffat talked about what we can expect the new Doctor and new companion Amy to be getting up to. There are some slight spoilers ahead, so read on at your own risk.

Not only are the angel statues from ‘Blink’ back, but they’ve been made creepier than before: “Those scary statues, I should warn you – and your children – are on their way back and they’re way way worse this time,” said Moffat.

“There is an episode in this series that I showed to my 10-year-old son and he said there is one scene that is the scariest thing that has ever happened in Doctor Who. There is another episode that will make you gasp, then want to press rewind so you can see it all again.” Considering how creepy the weeping angels were, you’d assume their second appearance would be the benchmark Moffat is talking about, because if it’s not, well, that doesn’t really bear thinking about.

If you’re a fan of Who romance then you’ll find something to like in the new series as well, something that is unlike anything that has happened in Doctor Who before: “You take two attractive people and they will probably be a bit romantic about each other… It is a complex story between Amy and the Doctor – it is not simple. It is not a story you have ever seen between the companion and the Doctor before.”

I reckon one of them turns out to be a lizard. Yes, that’s right, a lizard. Just you wait, you’ll see.

Miyamoto Focusing on Getting DS into Schools