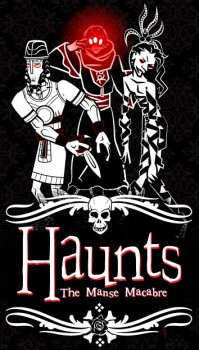 A semi-playable build of Haunts: The Manse Macabre is out in the wild.

As promised, Haunts: The Manse Macabre has been turned loose on the world. All relevant files, including the source code, development status documentation and bug report tickets have been released, along with the last compiled Windows executable, which provides the idly curious a bit of a look at what might have been.

“Happy Halloween! Well, not as happy as we had originally planned, but happier than I feared it would be,” Mob Rules Games boss Rick Dakan wrote in the last Haunts Kickstarter update. “I want to thank all of you for sticking with us and for all the kindness and support you’ve offered in the past few weeks. It’s been just plain amazing.”

Haunts: The Manse Macabre came to widespread attention in October when Dakan announced that development had ground to a halt, despite raising nearly $29,000 on Kickstarter. Dakan claimed in the original Kickstarter pitched that the team needed just $20,000 to complete the game, but things went wrong, programmers quit and the 1214 people who gave money to the project were left with nothing.

The playable build clocks in at 254 meg and while it does run, there’s not a whole lot to see or do. It’s senseless to be critical of a game that’s not even ready for beta testing, but if you do pick it up you should keep your expectations low. You’ll be able to place monsters and move around a bit, but it’s really not much more than a brief sight-seeing tour. The visual style hits the right tone, but the game obviously has a long way to go before it’ll be anywhere near ready for release.

To see what might have been or take part in what may yet be, point yourself at mrg-trac.sourcerepo.com. The development team has also put up some new Haunts wallpapers and mobile phone backgrounds at mobrulesgames.com.