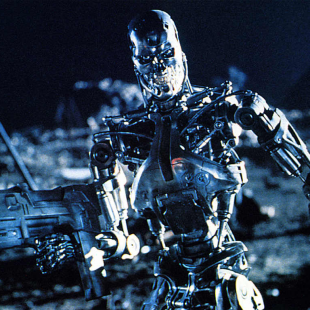 RoboEarth hopes to create a cloud-based database that will help robots become more intelligent and adaptable by sharing learned knowledge and experiences.

If there is one thing that science fiction has taught is, it’s that we can’t allow robots to get too smart. The Terminator, Battlestar Galactica, Mass Effect; these franchises and more have all driven home in one way or another that while intelligent, adaptable robots come with a lot of benefits, they can also be sources of apocalypse bringing, galaxy destroying, pointlessly sexy evil.

Not that scientists would ever listen. No, rather than trying to subdue our future mechanical gods as they should be, researchers are currently developing a cloud-based “world wide web for robots” that would serve as a “database repository where robots can share information and learn from each other.” Directed by the research group RoboEarth, a demonstration is in the works for this week that will have four connected robots working “collaboratively” to help patients in a hospital and adapt to their needs.

The tests are, according to RoboEarth project leader Rene van de Molengraft, the first steps in improving problems in the way that current robots work. “The problem right now is that robots are often developed specifically for one task,” he said “Everyday changes that happen all the time in our environment make all the programmed actions unusable.” The cloud network being designed by RoboEarth would allow robots to upload knowledge and experiences to a collective database that other robots could draw upon to then adapt to and work more efficiently in their own environments. The use of a cloud network would also mean that a robot’s “think tasks can be offloaded,” reducing the need for a powerful onboard computer. While some have voiced concerns about the potential consequences of increasingly intelligent machines, we can only imagine those calls for caution are being ignored by foolhardy researchers gone mad with power.

Steam Machine Maker Says Other Companies “Just Don’t Get It”