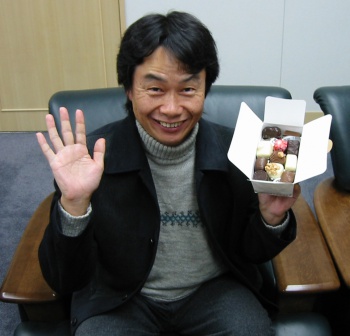 In a recently published interview with Time, legendary game designer Shigeru Miyamoto was asked for his thoughts on the imminent next generation of gaming consoles. While he seems to appreciate the new technology, Miyamoto hopes that the bells and whistles won’t serve as a crutch in the development of future games.

“From my perspective, with regard to the more powerful hardware systems, to me what still remains incredibly important is the developers maintaining a focus on creating unique games because if all that everyone does is uses the enhanced power to create more and more games that look and feel the same, then all that it becomes is a competition about the power of the hardware rather than the uniqueness of the experience,” Miyamoto states.

“That, to me, is where developers should be devoting their effort.”

It’s apparent that Time’s interviewer devised his questions beforehand (or just completely dropped the ball on pushing Miyamoto on this point), but it seems an interesting comment coming from a man who has spent so many years as the kindly face of a corporation that has built its fortunes on sequelizing popular franchises that date back more than two decades.

Don’t get me wrong, I agree with Miyamoto, and feel that his words are absolutely genuine, but, well, let’s just keep our fingers crossed that the man is able to push his weight around enough to ensure that future first-party Wii U titles feature more new, interesting gameplay ideas, and fewer attempts at wooing consumers with gimmickry.

Miyamoto was also asked to explain why the Wii U’s unique design elements (its touchscreen controller, etcetera) exist and how Nintendo hopes they might carry the company’s development efforts for the upcoming era, and he staunchly defended Nintendo’s dedication to creating fun, entertaining videogames regardless of whatever hardware its developers might be working with.

“… we’ve created Wii U to be the only hardware that is best-suited to the living room at a reasonable price that comes with a guarantee of the quality of Nintendo software. Obviously, we’re gonna put our efforts into taking advantage of the hardware capabilities to create amazing new experiences for our consumers, but it’s up to other developers to decide how they want to bring their creative ideas to life,” Miyamoto says.

That last bit? The part about the other developers bringing their ideas to life on the Wii U? Also an interesting comment. There’s little doubt that Miyamoto will be able to come up with a handful of interesting ways to take advantage of the Wii U, but what happens if/when Nintendo creates a console so divisively designed that only truly spectacular designers (like Miyamoto) are able to cobble together neat ideas for what to do with the technology? I don’t know that this is the case with the Wii U, but Nintendo’s designs grow increasingly out there with each new console generation, and at this rate it seems inevitable that the firm will eventually be building gaming machines that only its internal team of brilliant game creators are capable of utilizing. What then?

“We Are Watching You” Legislation Could Affect Xbox One