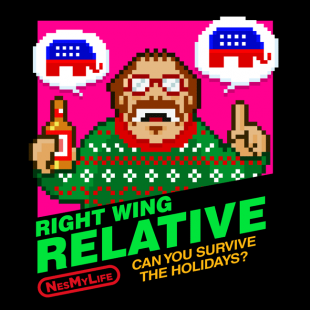 Artist Jeremy Kalgreen has launched a new line of T-shirts using NES games to poke fun at the frustrations of adult life.

The NES is arguably the classic console and it’s not hard to see why. In addition to being many people’s first introduction to the world of video games, it also represents a simpler time where the core concepts of a game could be expressed in a single sentence fragment on a piece of box art. Even if you enjoy being a responsible adult, there’s likely still a part of you that sits down at the end of a long, busy day and misses that sort of simplicity.

A custom T-shirt artist, Kalgreen recently looked at his life and “in a moment of self-awareness” realized that he was getting kind of old. Rather than getting all depressed about it, Kalgreen decided to embrace his emerging “fuddy-duddy-ness” and celebrate it with a new series of shirts poking fun at adult problems by tapping into his childhood days of gaming. “I found myself daydreaming about iconic things I still enjoy… and the image of a settled down Mario having a midlife crisis while Princess Toadstool was stuck at home with a screaming baby popped into my head,” he said, speaking to The Escapist. “Eventually that image morphed into this whole lineup.”

The shirt line, which he’s dubbed “NES My Life,” takes everyday problems and transforms them into wearable game covers modeled after the classic NES black box games. Included among the lineup’s launch selections are shirts dedicated to job hunting and chatty checkout workers. Also on the list is one focused on the bane of all modern existence: student loan debt. Each shirt costs $16.99 with tall versions and hoodies available for a higher price. Kalgreen has also affirmed that this opening round of shirts won’t be his last. “There are a lot of mundane topics that I think are ripe for ribbing,” he said. Suffice it to say we’ll be looking forward to seeing them. That is, of course, after we pay our bills, walk the dog, get the oil changed and put the baby to bed.