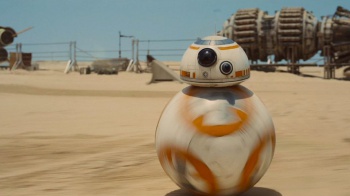 Mark “Luke Skywalker” Hamill himself says that the crazy rolling ball droid from Star Wars Episode VII: The Force Awakens trailer?” title=”” target=”_blank”>Star Wars Episode VII: The Force Awakens trailer? We all pretty much assumed it was some CGI trick, as after all, why and how you would even build one seemed ridiculous. Well, it turns out we’re wrong. Mark “Luke Skywalker” Hamill has been playing around on the set of the film (because he’s apparently going to be in it or something) and says that the crazy droid is a totally real thing that someone built.

“They never cease to amaze me with what they’re able to come up with, you know? I said, ‘How are you ever gonna top R2-D2, the most adorable droid in movie history?’ And then they have this new one. I can’t even tell you his name, but you saw it in the trailer,” he told Yahoo Movies.

“And when they were demonstrating how they did this thing, live on set – because it’s not CGI, that’s a live prop – I was just amazed. They let me play around with it. [Laughs] I was running it all around at the creature shop up in Pinewood. I’m telling you, it’s an absolute delight. And not having thought that I’d ever go back there, to go back into that world, is just – I get the chills. It’s just so much fun.”

Good news for fans (that include even Hamill himself) who were hoping that the new trilogy would have a better balance of CGI than the green-screen explosion fests that were the prequels.

Rosalina Amiibo Will be Exclusive to Target