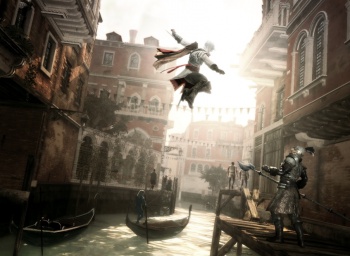 When Ubisoft announced its new DRM system, that required PC gamers to be connected to the Ubisoft servers at all times while playing, one of the biggest concerns that gamers had is what would happen if the servers went down.

Well, as it turns out, when the Ubioft severs go down, no one can play their games and Ubisoft customers get very upset. At around 8am GMT, people began to complain in the Assassin’s Creed 2 forum that they couldn’t access the Ubisoft servers and were unable to play their games. Fast forward ten hours and it seems that the problem still hasn’t been resolved, despite the assurances from a Ubisoft representative that the servers were ‘constantly monitored’

“I don’t have any clear information on what the issue is … but clearly the extended downtime and lengthy login issues are unacceptable, particularly as I’ve been told these servers are constantly monitored,” said ‘Ubi.Vigil’, adding, “I’ll do what I can to get more information on what the issue is here first thing tomorrow and push for a resolution and assurance this won’t happen in the future.”

It’s unclear whether this is a worldwide problem, or just a European one, but gamers are understandably frustrated. This is a disaster that everyone saw coming, but probably didn’t expect to see quite so soon.

(Thanks to Xanthious for the tip)