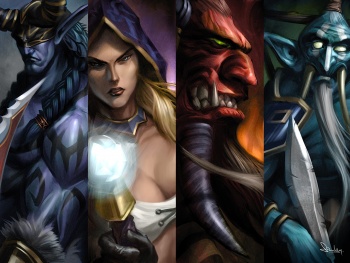 Popular PC developer Valve has registered a trademark for what is apparently popular Warcraft III mod Defense of the Ancients.

If you’ve never played Defense of the Ancients, it’s a wildly popular custom game built using the Warcraft III map editor in which players control a single hero (rather than an army) in a team battle to destroy the other team’s base. I also question why you clicked on this news piece in the first place, but that’s beside the point.

There has been some intriguing buzz as of late regarding DotA and beloved Steam-powered kingpin Valve. It started back in 2009, when Valve hired DotA developer Icefrog to work on a project that would make DotA fans “as excited as [he was].” It continued just a few days ago, when voice actor Jon St. John – also known as the voice of Duke Nukem – reportedly posted a Tweet that has since been deleted:

“Had a great time in Seattle last week recording for DotA. The guys at ValveSoftware are awesome! Going to PAX? Might see you there – Sept3-5″

Now, Valve has filed a trademark for something called “DOTA.” While none of this is absolute concrete evidence that Valve is working on its own DotA clone – to join the ranks of League of Legends, Heroes of Newerth and Demigod – it’s more than enough to make one wonder. Ah, maybe it’ll just be a TF2 mod.

While DOTA is immediately recognizable to anyone who’s ever played the original game, might I suggest some other alternate titles: GLeague of GLaDOS? Heroes of Newell? Demigordon, perhaps?