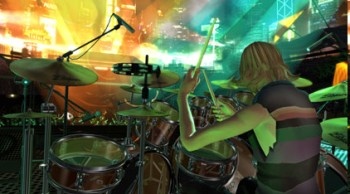 The Official Charts Company says it hopes to incorporate music sold for games like Guitar Hero and Rock Band in its weekly U.K. music charts in the near future.

The sale of music for use in videogames currently goes unaccounted in U.K. music charts but if publishers can come up with a system to provide the required sales data, the Official Charts Company says it could begin making use of the information within the next few months. That, according to managing director Martin Talbot, will spur interest in videogaming among music labels as they begin to see games as a legitimate tool for promoting their musicians.

“At the moment we’re not including downloads from games, and as a result of that labels aren’t promoting their releases through games in the way that they might if sales of these downloads contributed to the charts,” Talbot told GamesIndustry. “They would rather sell a vanilla download through Amazon or 7digital and have it contribute to the charts.”

Talbot said he’s not worried about the potential for the popularity of games like Rock Band and Guitar Hero to “skew” the charts because the purpose is to track music sales regardless of format. “The way that people go and consume and enjoy that music is not really our concern. If people went onto iTunes and bought a karaoke version of a Michael Jackson track because they wanted to celebrate on the day of his memorial, or whatever, that’s absolutely fine and it will be reflected in the charts,” he said. “Our concern is what is being bought on a weekly basis. We can never know the motives for people going out and buying music.”

He admitted that the release of music specifically for use in games could prove problematic in the future, but said he doesn’t think it’s very likely to happen in the near-term and that ultimately, it’s not really relevant. “If that’s the way people buy music, that’s the way they buy music – that’s all the charts are there to reflect,” he said.

Analyst: Activision Price Hike is a “Test” of Consumers