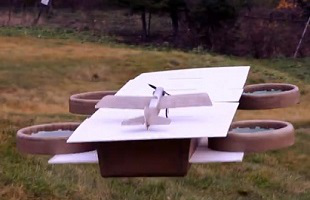 A drone takes off from atop another drone.

We’ve all dreamed of flying our own Avengers–SHIELD-inspired Helicarrier, but I think we’re a ways off from that kind of oddly-horrifying military technology.

But hey, at least we can launch drones off of drones now, right?

The intrepid team over at Flite Test did some quadcopter tinkering, resulting in a bite-size, remote-controlled Helicarrier. Capable of terrorizing the skies of your local neighborhood (or South Park), the mini-carrier is big enough to serve as a flying runway for one of Flite Test’s smaller single-engine creations.

The video of the two takeoffs can be seen here.

The Helicarrier drone was not cheap, using four $130 motors, and a total of $1,000 worth of hardware. And even then, you can see the craft struggle to some degree with balance and weight, even with the smaller drone on top being a lightweight.

You can see a gallery of some of Flite Test’s other creations below, and be sure to check out their podcast, and Facebook page.