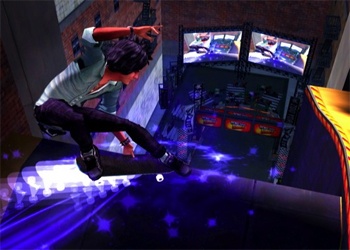 Activision’s upcoming Tony Hawk game is getting a lot more kid-friendly and a lot less realistic.

Despite the fact that Tony Hawk: Ride was, well, generally considered terrible, Activision is committed to releasing another game that utilizes the skateboard control. However, this new game Tony Hawk: Shred is being marketed towards kids because that was the audience that Ride was the most popular with.

According to Joystiq, which got to see a demo of the game in action, Shred is designed to be a more cartoon-like experience with both its art and its gameplay. As a result, the game completely leaves any sense of realism behind in lieu of insane (read: physically impossible) stunts that are sure to thrill younger gamers.

In Shred, players will jump off buildings, leaving craters in the ground when they land. They will also be able to, “jump and grind between roller coaster-styled rails in levels that would feel at home in a Sonic game.” The game will mainly consist of linear downhill levels so you’ll know where you’re supposed to go. Shred‘s big addition to the Tony Hawk franchise, though, is the inclusion of snowboarding, as well as some big-name snowboarders as playable characters.

One of the major complaints many players had about Ride was that the skateboard controller was often difficult to use. Activision has promised that Shred will have better controls that are easier to use; an example of this is that any motion made before hitting a rail will be interpreted as a jump.

Tony Hawk: Shred certainly sounds like it has the potential to be better than its predecessor, but it’s hard to get excited about the game before anyone gets to spend some hands-on time with it. The game is due out sometime during the 2010 holiday season, with the hardware bundle selling for $100 instead of Ride‘s launching pricetag of $120.