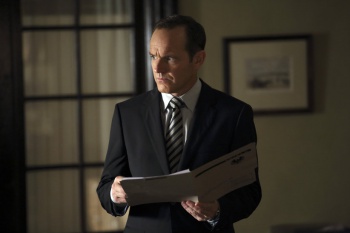 Coulson and the other Agents of S.H.I.E.L.D. are going to have a run-in with someone very interesting when Season 1 wraps up.

Alright, first off, spoiler warning: we’re talking about the season finale of Marvel’s Agents of S.H.I.E.L.D., so turn back now if you want to be surprised. No spoilers for The Winter Soldier though.

Agent Coulson and the rest of the gang are headed for an encounter with a familiar face, it seems. The show is currently about eight layers deep in conspiracies and intrigue, and certain events from Captain America: The Winter Soldier are going to shake things up even further very soon. There’s no telling which direction the plot will go just yet, but we’ve learned that the season’s finale episode will probably resolve at least one of the show’s big mysteries: what exactly is going on with Nick Fury.

Samuel L. Jackson confirmed that he would appear in the finale when asked if he would make another cameo in the show. “I did! Last week! I just shot the end-of-the-season show,” Jackson said. He wouldn’t spill any details, though – not when there could be Marvel snipers watching him at any moment. “You’re trying to get me fired and killed!” he said when pressed for more information. “I don’t talk about Marvel’s business. None of us do.”

Jackson appeared in the stinger of the show’s second episode, but that was before… well, let’s just say a lot has happened since then, and his next appearance probably won’t be so light-hearted. There’s still plenty of time before the finale airs, though, so keep an eye on the Agents – knowing this show, Fury’s part in all this won’t play out the way you might expect.