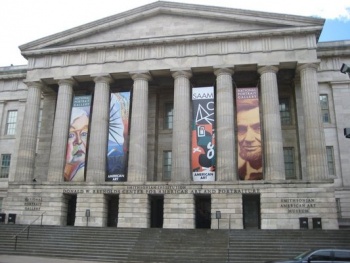 Unless you enjoy art, a significant other dragging you to an art museum can be a bit of a bore sometimes. Now that an alternate reality game called Pheon is launching at the Smithsonian American Art museum in Washington D.C. on September 18, it might be worth the trip even if Picasso doesn’t float your boat.

Pheon was designed by John Maccabee and it incorporates the Smithsonian’s exhibits with mission-based objectives. It has a story and everything, which follows the fictional Terra Tectan society that once lived undisturbed by the rest of humanity. When outsiders, also known as the Seers wanted in, a Terra Tectan named Vidar invoked a dark power to keep them out, becoming corrupted in the process and beginning the “war of authenticity.” An online comic tells the whole tale.

The game will pit museum goers against each other as either Staves or Knaves that must complete quests based around the Smithsonian’s exhibitions and art collections, which will advance the game’s plot. According to the game’s launch flyer, it will require “ingenuity, your ability to make things, to text, and to find and perform.” Players also earn points and can level-up from Neophyte, to Acolyte, to a Lamplight Council member. Once high level enough, you can then write missions for lower ranked players.

The goal of Pheon is to capture the aptly-named Pheon, an artifact that has the power to restore balance to Terra Tectus. It reportedly works in a similar way to Capture the Flag. The game incorporates both Facebook and Twitter features as well, and will run for one year.

This is the second alternate reality game Maccabee has created for the Smithsonian, the previous being Ghosts of a Chance, which is said to be the first ARG hosted by a museum ever. I happen to be one of those strange types of people that actually likes art museums, but I like games too, so I wouldn’t mind enjoying both at the same time one bit.