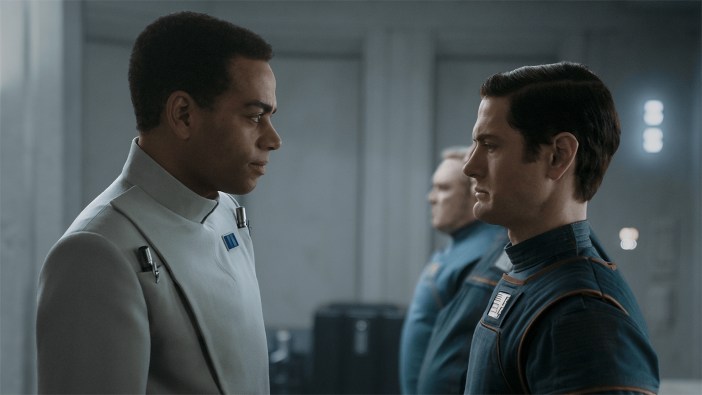 This discussion and review contains spoilers for Andor episode 4, “Aldhani.”

One of the more interesting aspects of Andor is the way in which the show approaches the Empire and its growing influence. Andor feels like the first live-action Star Wars project since Return of the Jedi to ask what it actually means for that power to be an empire.

This was obvious during the three-episode premiere, which neatly paralleled the arrival of the “corporate tactical forces” on Ferrix with flashbacks to the “Imperial mining disaster” on Kenari. The opening triptych effectively ran two origin stories for Cassian Andor alongside one another. As a child (Antonio Viña), Kassa was secreted off Kenari by Maarva Andor (Fiona Shaw). As an adult, Cassian (Diego Luna) is evacuated from Ferrix by Luthen Rael (Stellan Skarsgård).

Luna has talked about how important it was to him that showrunner Tony Gilroy chose to frame Andor as a story about a migrant and a refugee. “It’s the journey of a migrant,” Luna told Vanity Fair. “That feeling of having to move is behind this story, very profoundly and very strong. That shapes you as a person. It defines you in many ways, and what you are willing to do.” In other interviews, Luna has drawn the obvious parallel between Luna’s story and that of countless modern migrants.

In the decades since the release of the original Star Wars, the Empire has become a cultural shorthand for evil. It’s not difficult to understand why that is. Officers wear black and gray uniforms styled after the Nazis. Its functionaries speak with British accents, which is effectively code for villainy. The Empire is headed by a wrinkled monster named Palpatine (Ian McDiarmid), who dresses in a black cloak and casually says things like, “Let the hate flow through you.” They are the bad guys.

However, decades removed from the original trilogy, it can be difficult to keep track of what exactly makes the Empire evil and what it means for it to be an empire. George Lucas has been candid that Star Wars was inspired by the Vietnam War, and the Empire is based on the United States. Return of the Jedi is explicit in framing the Empire as an imperial power in its conflict with the Ewoks, who were even named for an indigenous tribe in Northern California.

Lucas would continue these themes into the prequel trilogy, albeit clumsily. The Phantom Menace finds the indigenous population of Naboo standing against the armies of the Trade Federation, a statement somewhat undercut by Lucas’ use of broad racial caricature. In Attack of the Clones, Anakin Skywalker’s (Hayden Christensen) descent to the Dark Side is solidified by his massacre of an entire camp of Tusken Raiders, even if they are presented as little more than racialized clichés.

Decades later, The Mandalorian and The Book of Boba Fett both worked hard to develop and explore Tusken culture, to deepen these aliens beyond stereotypes about “primitive” indigenous cultures. However, there was only so much that these stories could do. The Book of Boba Fett is essentially a Star Wars riff on something like Dances with Wolves or The Last of the Mohicans. The indigenous culture is treated as an object of respect but never allowed to center the narrative.

Part of what makes Andor so compelling is that it is preoccupied with the myriad faces and consequences of imperialism. After all, the entire point of an Empire is to expand. Andor understands that the tendrils of these institutions reach in different directions and express themselves in different ways, but they all work towards the same purpose. The Empire must grow. The Empire must consume. The Empire must dominate.

Cassian himself is a victim of the most direct form of imperialism. He was a small child on Kenari when a mining vessel crashed on the surface of the planet. One of the survivors shot an indigenous inhabitant, and the locals responded in self-defense. A scavenger named Maarva found the young boy in the wreckage of the ship and spirited him away to Ferrix, realizing that the death of a single uniformed officer would mean it would be “open season” on the indigenous population.

Andor has yet to reveal what happened on Kenari after Cassian was abducted, but the implications are not good. Like many migrants, Cassian has adopted an “anglicized” version of his birth name Kassia to better integrate into society. Local officials don’t recognize the Kenari name or language. Cassian has had to lie about his background and origin.  “Who else knows you were born on Kenari?” Maarva presses him as the stakes escalate.

In “Aldhani,” Cassian visits another world subject to the Empire’s imperialism. “There used to be hundreds of settlements up here,” explains Vel Sartha (Faye Marsay). “Forty thousand Aldhanis all across the Highlands. They were here for centuries, but it only took the Empire a decade to clear them out.” Aldhani was not the victim of mass murder — it was a different sort of destruction of a culture. The Empire “drove them south” to the “factories, new towns, imperial housing.”

This sequence was shot in the Scottish Highlands, at Cruachan Dam in Dalmally near Oban and Glen Tilt near Blair Atholl. As such, Vel’s narrative cannot help but recall the infamous “Highland Clearances,” which displaced the indigenous population. Some of the dislocated people provided fodder for Britain’s Industrial Revolution, while others were forced to migrate to places like North America and Australia. It’s not as literal an apocalypse as the destruction of Alderaan, but it is the end of a world.

There are indications that Luthen might have a similar backstory to Cassian. He certainly recognizes something of himself in the young man. Here, he entrusts Cassian with “a Kuati Signet,” which “celebrates the uprising against the Rakatan invaders.” It clearly means a lot to him. After dropping Cassian on Aldhani, Luthen travels to Coruscant. He puts on a costume to disguise himself, recalling Cassian’s explanation for how he infiltrated an Imperial base. “You just walk in like you belong.”

Luthen poses as an antiques dealer on Coruscant, peddling the rare artifacts of long-lost civilizations to the planet’s moneyed classes. It’s a nice allusion to another iconic Lucasfilm character, but it also understands that this sort of archeology is its own sort of imperialism. Luthen is a finder of rare and displaced things, of what little survives of these destroyed worlds. Cassian is just a living counterpart to the burnt cottages on Aldhani or the relics on Coruscant, the detritus of imperialism.

These are very direct and very literal expressions of imperialism — armed soldiers oppressing a civilian population. When the Preox-Morlana begin tossing her homestead in “Reckoning” — an intimate manifestation of the violence being visited on the local community — Maarva protests to B2EMO (Dave Chapman), “They can’t do that. They’re in our home.” Of course, they can. That’s the appeal of this sort of interventionism. Those with enough power can do whatever they want.

However, Andor understands other more insidious expressions of imperial power. In “Kassa,” Chief Hyne (Rupert Vansittart) warns his subordinate Syril Karn (Kyle Soller) about the importance of keeping their operation off the radar. “Minimizing the time the Empire spends thinking about Preox-Morlana benefits our superiors and by extension everyone here at the Pre-Mor Security Inspection Team,” he explained, understanding the Empire just needs excuses to expand its sphere of influence.

Following the embarrassing debacle on Ferrix, “Aldhani” demonstrates that Hyne was entirely correct. Lieutenant Supervisor Blevin (Ben Bailey Smith) visits Preox-Morlana to inform Hyne that the Empire will be taking a much stronger hand in local affairs. “You’ve rung the final bell on corporate independence,” Blevin tells Karn. “As of this morning, the Morlana system is under permanent Imperial authority.” The Empire didn’t need to fire a shot to take Karn’s home from him.

This is a more subtle expression of the Empire’s methods than is generally depicted in Star Wars, but it speaks to the way in which “soft power” serves to expand the influence of empires. Andor also demonstrates the impact that this sort of power can have on individuals. “Aldhani” brings the show to Coruscant, the “Capital of the Galaxy,” but it illustrates the way in which the Empire intrudes into the lives of even those living at its center.

Mon Mothma (Genevieve O’Reilly) is organizing a resistance movement with Luthen, but she also has to keep up appearances with her husband Perrin Fertha (Alastair Mackenzie). She is horrified to discover that Perrin has organized a dinner party and invited Imperial officials to attend. When she protests, Perrin assures her that she will be seated away from them. “You’re at the boring end of the table,” he promises. “These people are fun.”

“Oh, are they?” Mothma responds. “Are they fun? We should find some Ghorman guests for tonight and see how amused they are. Your fun friends just cut off their shipping lanes yesterday. Do you know how many will starve? Oh, perhaps we can laugh about it, over the third course.” Perrin is unmoved by his wife’s appeal to his basic humanity. “Must everything be boring and sad?” he counters, with all the self-awareness of somebody who might argue Star Wars was never political.

Andor is a prequel to Rogue One, a movie that undoubtedly resonated with audiences in an era of resurgent fascism. Andor builds on that, asking what it must feel like to live in a society that is dangling on the edge of a precipice. The lives of Luthen and Mothma on Coruscant suggest the sort of compromises that an individual has to make living in such a world. The Empire doesn’t just demand compliance from its subjects; it requires complete submission to its norms and values.

The Empire has long been one of pop culture’s enduring expressions of evil. Andor understands why. It doesn’t just invade foreign places; it corrupts and destroys the very idea of home. 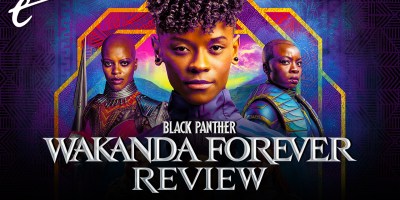 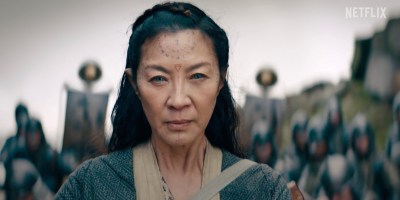 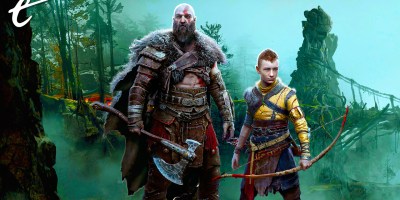