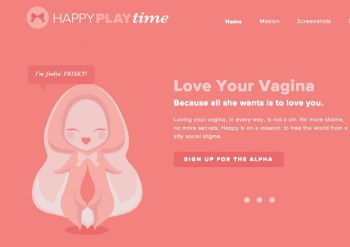 It’s an admirable goal, but apparently not one that Apple feels comfortable supporting. Despite the complete absence of graphic content in the HappyPlayTime app, it rejected both the initial App Store submission and an appeal filed last week by creator Tina Gong, saying it violated two restrictions: One against “excessively objectionable or crude content,” and one forbidding “pornographic material.”

“My guess is that Apple might have understood the purpose of it being educational, and that it was built with a mission, but wants to force me to strip out all the things that make this game what it is,” she added. “And I can’t accept that.”

Gong said she’s trying to make direct contact with the App Store decision-makers in order to plead her case, and while the touch-screen design means that a PC release isn’t likely, she also holds out hope for an Android release.