Ark: Survival Evolved may be one of the most successful Early Access games on Steam this year, but it appears the survival game may find itself embroiled in a legal case. 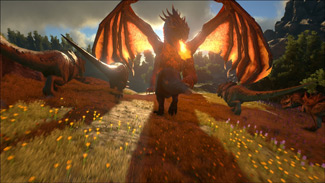 Studio Wildcard, the developer behind Ark, is being sued by Trendy Entertainment, the developer of Dungeon Defenders. The suit claims that former Trendy game designer Jeremy Stieglitz violated the terms of his contract with Trendy by attempting to poach employees to work on a new project that supposedly became Ark

The litigation is still just beginning, and there’s really no way to know what may come out of it. However, Trendy is seeking an injunction that would temporarily force Studio Wildcard to stop development on Ark, and perhaps even make them pull the game from Steam.

While Wildcard has yet to respond to the suit, their attorneys have issued a statement, which reads as follows:

“Trendy’s Complaint reads more like a salacious tabloid story than a short and plain statement of the ultimate facts allegedly showing Trendy’s entitlement to relief, as required by the Florida Rules of Civil Procedure. Many of the allegations are disparaging and included simply to be provocative. They are irrelevant, immaterial, impertinent, and scandalous. As such, these allegations should be stricken.”

As with most lawsuits, this one has all sorts of facets and angles to consider, and since I am not a lawyer, I’ll leave that to them. That said, it bears watching, especially for fans of Ark and its recently launched mod-turned-esport, ARK: Survival of the Fittest.

There’s a much more in-depth look at the whole case and the history behind it over at Kotaku.