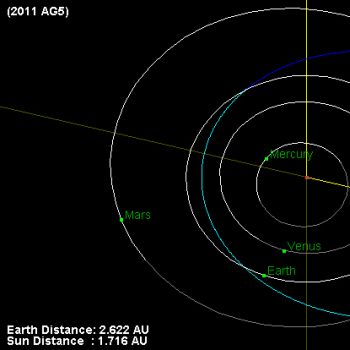 An asteroid spotted in January 2011 has had its course recalculated and has a lower chance of hitting earth.

When 2011 AG5 was discovered last year, it was believed that there was a small possibility it would collide with earth 28 years later, but thanks to the diligent work of scientists watching the hard-to-track asteroid, it looks like it definitely won’t. 2011 AG5, which is about 460 feet across, was on track towards earth with about a 1-in-500 probability of striking. It is now believed that the asteroid will pass earth at about twice the distance from earth to the moon.

A scientist with the team that monitored AG5 said that “these were extremely difficult observations of a very faint object.” The photographs of the asteroid were taken with the Gemini North telescope in Hawaii. NASA and other scientists worldwide work together to monitor and catalog near-earth asteroids. About 9,000 near-earth asteroids have been discovered to date, and NASA believes that of those, 95% of the kilometer or larger asteroids have been discovered.