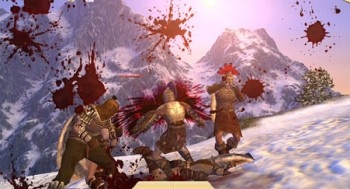 While Australian politicians are making noise about considering an R18+ rating for videogames, they’re also taking steps to clamp down on a legal loophole that, in the opinions of some, allows MMOGs to be sold without a rating.

Australia is notorious for its refusal to implement a “mature” rating for videogames, an intensely aggravating situation for many Australian gamers, but the country’s videogame industry apparently believes that MMOGs are exempt from such ratings because they don’t offer a single-player component. “There are different classification requirements for games depending on how they are accessed by consumers,” said Interactive Entertainment Association of Australia CEO Ron Curry. “For instance, for a game sold off the shelf, where the media material is stored on a disk in the package, the classification requirements are straightforward and you will see the classification label on the box.”

“However, in some instances the box sold in a retail outlet contains an access key to the game which can only be accessed online,” he continued. “If such a game is hosted locally it falls under the jurisdiction of the Broadcasting Services Act, but if it is hosted internationally, it’s classified in the country that hosts the game, rather than in Australia.”

It’s an interesting and unexpected twist, and one that New South Wales Attorney General John Hatzistergos isn’t buying into. “The NSW legislation covers computer games bought online as well as those bought in stores, and treats single, multi-player and online games the same way,” he said, adding that any illegal game sales should be reported to the police.

A spokeswoman for Robert McClelland, the attorney-general of Australia, confirmed that federal legislation also covered such games. “The National Classification Scheme does not distinguish between games based on whether or not they contain a single player component. Online games are computer games within the meaning of the Classification (Publications, Films and Computer Games) Act 1995 and are covered under the existing legislation,” she said.

Yet while the law seems clear enough to politicos, unrated videogame sales don’t seem especially high on the police priority list. A spokesman for New South Wales Police Minister Tony Kelly said, “Police officers in the NSW Police Force will respond to complaints received from members of the community or other agencies,” but apparently had no response when he was asked why the police needed to wait for a complaint when nearly every retailer in the country is selling the games without a classification.

Individuals convicted of breaking classification laws face fines of $700 to $7000 and/or up to a year in jail, while fines for corporations are roughly double those amounts. Whether or not Australian governments will actually pursue game publishers and retailers for selling unrated online games remains to be seen, but the sudden increase in the risk of legal hassles will likely be enough to ensure that MMOGs on Australian shelves will soon be carrying proper ratings. It may not affect most gamers since very few MMOGs approach the “mature” barrier, but at least one well-known title – Age of Conan – has earned an M (Mature) rating from the ESRB and 18+ from PEGI. Should it fall afoul of Australian censors, it seems likely that Funcom would have no choice but to pull the game entirely, resulting in yet another pointless loss for the country’s gamers.

UPDATE: We contacted Funcom to ask about potential changes in Australian policy, and it sounds like the company is as much in the dark on this as everyone else. “We haven’t heard a word, and not from Atari either, who distributes the game,” Product Director Jørgen Tharaldsen said. “I saw the headlines this morning, but I’m not sure what it entails.”

He did imply, however, that if Age of Conan did experience trouble getting a rating, the game could be edited to fit Australian rules. “We have been very careful on all ratings though,” he continued. “We even have different versions of Conan in, i.e., Germany to cater for the ratings, so we have definitively put a lot of resources into making sure our game meet the standards of the various government rating boards.”

4 Minutes And 33 Seconds Of Uniqueness