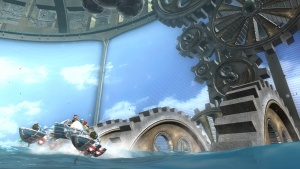 A major Xbox 360 title planned for fall, Banjo-Kazooie: Nuts & Bolts appears to use motion control, according to a recent demonstration.

In a video walkthrough for IGN, the game’s creative director, Ken Lobb, noted that players can manipulate objects by moving the controller in various ways, including shaking.

That description all but confirmed ongoing rumors ahead of E3 that Microsoft is planning a motion-sensing controller for the Xbox 360.