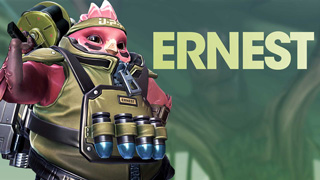 The newest DLC hero is coming to Battleborn next week, and it’s a demobird armed with a grenade launcher.

If you’re one of the folks who is still playing Battleborn, you’re about to have another hero to add to your arsenal. Gearbox has announced that the newest hero is Ernest – a bird with a knack for demolition.

Ernest is a member of the Peacekeeper faction who focuses on defensive play. Armed with a grenade launcher, he utilizes a variety of munitions to fill both offensive and defensive roles. Gearbox describes him thusly:

“This demobird is explosive on the battlefield. Some might call him a well-aged boy scout, but Ernest’s sense of honor and duty brings a new means of support and defense previously absent from the Peacekeepers – this is no small part thanks to his grenade launcher. The various explosive charges help Ernest lean on the offensive or provide a mean line of defense for his team.”