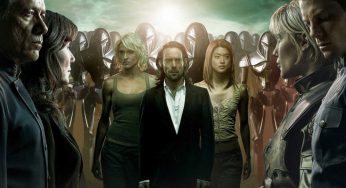 The final major streaming service, NBCUniversal’s Peacock, has laid its cards on the table, and its ace in the hole (aside from every episode of The Office) is a reboot of Battlestar Galactica helmed by Mr. Robot creator Sam Esmail. Aside from the fact that the series is happening, there are scant other details except that Chad Hamilton is executive producing alongside Esmail.

This will be basically the third time the show is rebooted, believe it or not. The original Battlestar Galactica was a short-lived science fiction show that debuted in 1978 but garnered a cult following that led to a 10-episode revival of the series in 1980. The series lay dormant until 2003 when Ronald D. Moore (of Star Trek fame) rebooted it for SyFy. The rebooted series was outrageously successful and helped usher in a new era of science fiction television that often ditched episodic content for great overall narratives and, now ironically, coined the phrase, “All this has happened before, and all this will happen again.” This reboot seems to be taking that to heart, though the series could simply take place within the world of the franchise.

Battlestar Galactica is not the only series being rebooted for Peacock, either. Saved by the Bell is getting yet another iteration with some original cast members returning, and Punky Brewster will also return from the dead. The streaming service will feature a number of original shows too, including the Ed Helms-Mike Schur comedy series Rutherford Falls, a weekly show with Amber Ruffin; Dr. Death, starring Jamie Dornan, Alec Baldwin, and Christian Slater; and a host of other series. That’s not to mention it will also be the exclusive home of Parks and Recreation. It will have a host of non-exclusive shows too, as well as films from the Universal vault like the Fast and Furious series.

Launching in April of 2020, Peacock will be a latecomer to the streaming wars as Disney (Disney+), Apple (Apple TV+), and WarnerMedia (HBO Max) will all have already launched their respective streaming services. Given Disney and Apple’s low costs and prestige output, the platform will need to come with some serious firepower to make a dent in a media battle that’s not going to have too many winners. Maybe Battlestar Galactica can be it.