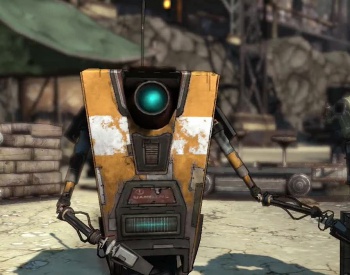 Lionsgate is developing a full-length Borderlands film with Avi and Ari Arad producing.

Gearbox’s Borderlands franchise is an undeniable gaming success story, spinning off into two sequels and a Telltale Games episodic series. But could Claptrap, Handsome Jack, and those explosive Pandora battles appeal to movie audiences? There’s a chance we’ll soon find out – Lionsgate is currently developing a full-length Borderlands film with Avi and Ari Arad producing.

“The Borderlands games don’t pull any punches,” Lionsgate Motion Picture Group Co-Chairs Rob Friedman and Patrick Wachsberger said in a statement. “We’ll make the movie with the same in-your-face attitude that has made the series a blockbuster mega-franchise.”

Borderlands‘ setting certainly lends itself well to film. The series is set on Pandora, a once-lush planet harvested and abandoned by a futuristic corporation. Now treasure hunters seek a legendary Vault believed to contain great riches on its surface, battling raiders, robots, aliens, and giant monsters along the way. A Borderlands film could easily pick up the Vault Hunter plot, or dive straight into Handsome Jack’s schemes from Borderlands 2.

There aren’t any other details on Borderlands‘ plot, actors, or release date, but I imagine players can start getting pretty excited. Lionsgate could simply go for a “Mad Max in space” tone and still have a solid flick. But throw in Pandora-based action, and fan-favorite characters like Claptrap and Mad Moxxi? Borderlands could draw in quite a few new fans who haven’t even heard of the game.