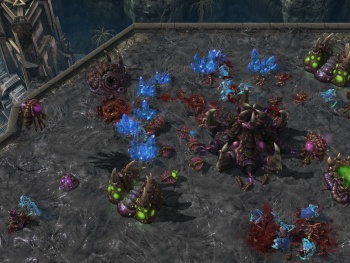 StarCraft II: Wings of Liberty may have been a huge release, but it was only one third of Blizzard’s seqilogy, the second of which the studio is now working on “hardcore.”

When Blizzard first announced that StarCraft II would be divided into a trilogy with three full single-player campaigns, instead of three smaller ones like in the original StarCraft, misunderstanding cries were uttered. Now that StarCraft II has been released, people seem to be relaxing as they realize the scope of what Blizzard is going for. Next up is StarCraft II: Heart of the Swarm, which Blizzard says it is now going at “hardcore.”

The second game of the trilogy will follow the Zerg, an alien species totally different from the human-like Terrans of Wings of Liberty. Blizzard’s executive vice president of game design Rob Pardo talked to MTV Multiplayer about the upcoming game (and its eventual sequel) and how it’ll differ from the first StarCraft II. The studio is sticking with a branching mission structure, but is “going to do some things that are pretty different based on the races themselves,” he says. “We really want to make each racial experience feel true to the race and feel interesting, so I think there will be some similar stuff and some stuff that really diverges to make sense for the race.”

Pardo says that each new game will feel like a sequel from a single-player point of view, while from a multiplayer perspective they’ll feel like expansions sets. As for when we’ll see Heart of the Swarm, that’s a silly question to ask Blizzard, but he did give an indication of the current progress of the game.

“We’re just now getting serious about breaking ground on [Heart of the Swarm],” Pardo revealed. “We always have a lot of ideas and there’s been some design work on it, but hardcore art and programming is just now starting to begin. It’s too early to estimate, but as soon as we can get them out there, we’d love to.”

I say give the StarCraft world at least a year before making it go crazy again, Blizzard. I’m personally more of a Diablo guy anyway.