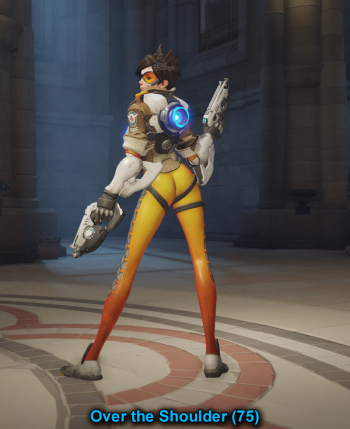 Blizzard has responded to controversy surrounding a victory pose from Overwatch‘s Tracer.

While I stand by my previous comment, I realize I should have been more clear. As the game director, I have final creative say over what does or does not go into the game. With this particular decision, it was an easy one to make-not just for me, but for the art team as well … We wouldn’t do anything to sacrifice our creative vision for Overwatch, and we’re not going to remove something solely because someone may take issue with it.

You can read his full statement here.

Original Story: A few days ago on the Blizzard forums, a post was made by a user named “Fipps”. The user praised Overwatch‘s female cast of heroes, but was critical about a particular in-game pose by Tracer. It’s recommended that you give the entire thing a read for yourself to understand the topic.

“So I wanted to start off by saying, I think the development team has done a pretty great job with the cast of female hero’s in Overwatch. They are diverse, interesting, and compelling. From Mei to Zarya to Widowmaker the female cast reflects a large spectrum of personalities and player fantasies,” Fipps stated.

Fipps first complimented Blizzard on what they thought the team did right. But later in the post, Fipps says “Then out of seemingly no where we have this pose,” linking to this image.

Fipps talks about this aspect of one hero of Overwatch for the rest of the post, arguing that Tracer’s pose reduces her to a “female sex symbol” symbolically. “What I’m asking is that as you continue to add to the Overwatch cast and investment elements, you double down on your commitment to create strong female characters. You’ve been doing a good job so far, but shipping with a tracer pose like this undermines so much of the good you’ve already done,” Fipps said in closing.

Today, the thread received a response from the Game Director for Overwatch, Jeff Kaplan. “We’ll replace the pose. We want everyone to feel strong and heroic in our community. The last thing we want to do is make someone feel uncomfortable, under-appreciated or misrepresented. Apologies and we’ll continue to try to do better.”

This responsive decision by a game developer is one in a series of recent controversies. Last November, a slap animation was removed from R. Mika in Street Fighter V, and in January of this year it was discovered that a petting mini-game was one of many localization changes made for the Western release of Fire Emblem Fates.

Overwatch‘s customization system is optional, and the cosmetic rewards aren’t a mandatory feature. When leveling up your character, you earn loot boxes that have an array of skins, sprays, victory poses, and voice emotes options that you can acquire.