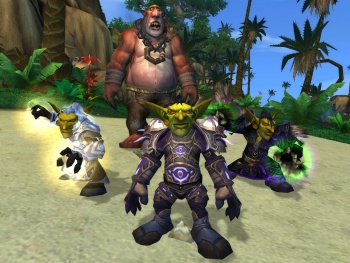 The new Goblin race gets up to all sorts of mischief in World of Warcraft: Cataclysm.

As a Horde player, I refuse to try out the demo of the Worgen starting area Blizzard has up for play here at BlizzCon, but judging from Funk’s impressions of the experience, it sounds like a complete 180 from what I got my hands on when I booted up a level 6 Goblin Mage. Compared to what seems like the more straightforwardly serious tone of the Worgen content, the Goblin content is decidedly lighthearted.

It all started with my character lying unconscious on a raft floating near a beach. The goblins, part of the Bilgewater Cartel, have been shipwrecked, and once I got resuscitated (via defibrillator), it was time to aid the relief effort. That means running around collecting supplies, killing raptors and throwing explosive bananas at the monkeys who are ruining everything by throwing bombs (yeah I don’t know) at my goblin fellows.

The quest area was extremely crowded, and it took a good half hour before I finished the first set of quests. Mobs are constantly spawning and getting tagged before I can get to them, supplies I need are swiped just as I go to click on them. But it gets done, at which point I moved down to a handful of quests in a nearby cave, finish those, and then head for the hills.

There I get to do some groundskeeping. An orc is standing in the middle of a jungle full of hundreds of feral looking plants. He hands me an item which puts me into “weed whacker” mode: I start spinning around while holding a giant blade, doing a whirlwind like the Barbarian from Diablo. It’s an easy and fun quest – 100 plants go down easy as I slice through them.

The quirky quests continue from there. Next, I’m paired up with an Orc Scout and asked to kill some cloaked human spies. I put on a pair of infrared goggles (quest name: “Infrared? More Like Infra-Dead!” or something like that) which highlights the invisible bad guys and they’re easy to take down. After that, I steal a gyrocopter from a gnome and fly to an Alliance ship, where I have to recover “precious cargo” that turns out to be (SPOILER ALERT from here on out) none other than Thrall himself.

Thrall turns me into a giant typhoon and I fly around the ships, sending lightning bolts down and killing 50 some humans in a matter of a couple minutes. It’s very lightheartedly violent, and quite empowering. After that I meet up with Thrall again and have basically made my way from shipwrecked refugee to full-on member of the Horde. Not all my goblin NPC bros are cool with this, but whatever. I get into a giant catapult and take a rocketship to the other side of the island, where I’m met with an invisible wall and the end of the demo.

Or is it? There is a whale-sized hammerhead shark in the ocean, a level 10 Elite. I swim toward it, and get one-shotted. Game over. Hmm. Maybe I shouldn’t have signed up for the Horde.