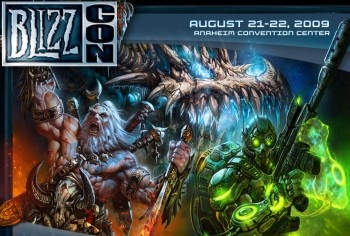 Activision says that tickets to the 2009 edition of Blizzcon, the annual-ish two-day celebration of all things Blizzard, sold out completely in eight minutes.

The Blizzard wheel just keeps on turning and if Blizzcon ticket sales are anything to go by, even the merger with Activision, seen by many as the industry’s new face of evil, hasn’t slowed it down. Tickets to Blizzcon 2009 were being sold for a hefty $125 each – more than Comic Con, more than PAX – and yet all 20,000 of them sold out in eight minutes.

Eight minutes. If you decided to nip down and make a sandwich while you waited for the sale to begin, you probably missed out. As Big Download notes, that’s presumably a combined eight minutes over the two separate days Blizzard had the tickets on sale.

But don’t fret if you missed out: Blizzard is once again offering pay-per-view access to the show through DirecTV (in the U.S.) or online via streaming video for $39.95. It’s not exactly the same as being there, but at this point it’s as close as you’re going to get.

Blizzcon 2009 takes place at the Anaheim Convention Center in Anaheim, California, on August 21 and 22. Check out blizzcon.com for more information.