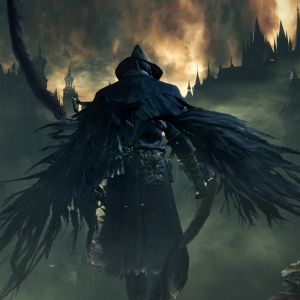 You’ll need help to get through this demo of Bloodborne – thankfully they left a note.

During Sony’s keynote at the PlayStation Experience, I didn’t catch the Japanese word for “roguelike” from Hidetaka Miyazaki’s during his presentation. Whatever it is, we’ll likely be hearing a lot of it from designers as they mimic the nature of an action game in which you are expected to die quite often. Miyazaki may have had a hand in popularizing the term “roguelike” his designs of Demon’s Souls and Dark Souls, but he’ll damned if he’s not going to let it ride. Bloodborne has an intricately designed setting and a wonderful look and feel, but it’s the small touches like the notes left behind by other players and the specters of their death that will likely make the experience unique to many.

The demo allowed me to choose my character – I went with the plague doctor guy with dual swords and a pistol. I don’t know why, but that long hook nose look is irresistible to me. The description said this hunter was agile and fast, and the animations certainly appeared that way as I tested out the controls. Even though this was an early build, it felt incredibly polished.

Scattered around the little area I started in were some old broken down wagons, and a few piles of bones. Ordinarily, those bones would just be window-dressing, but in Bloodborne they signal something else – a short message left by another player. You can open these to reveal what the player had deemed important enough to leave behind. Because this was a build likely only touched by the game’s designers, the notes near me all had something cryptic to say instead of the usual string of “poop” or “caca” that would be there. There was a rudimentary voting system, wherein the more silly notes could be filtered away, so hopefully that’s what was happening here.

You can also find specters on the ground. Interacting with these will bring up an outline of a player’s character being killed. You can’t really see what killed them, or why exactly, but you can infer a lot from their motions. This is how you’ll be able to hopefully guess the right course of action from the”wrong” way your predecessors approached the challenge. You see, very Dark Souls.

The gameplay itself seems bog standard with light and heavy attacks, dodging, etc. needed to take down the creepy enemies. It looks like Bloodborne aims to be pretty difficult. You can be overwhelmed by foes in a flash so you’d do well to pay attention to the signs left behind. If that sounds fun to you, then Bloodborne is your bag. I played enough of it to know that it wasn’t really mine.