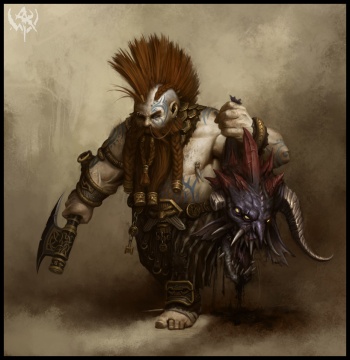 Legendary rockers Blue Öyster Cult have recorded a song in tribute to the Dwarf Slayer, one of the new classes in Warhammer Online.

World of Warcraft may have house band Level 80 Elite Tauren Chieftain, but I’m pretty sure a band made up of Blizzard employees doesn’t beat classic rock luminaries Blue Öyster Cult, who, it so happens, have expressed their adoration of Warhammer Online in song.

“I’d heard a previous song written and performed by members of the WAR team, and thought they were quite good for a ‘garage band’ of game developers,” Eric Bloom, lead vocalist of the band, recalled.

Turns out Bloom is a WAR fanatic himself (he plays a Level 40 Sorceror), so naturally, when Mythic gave him a call asking him to write a ditty about the game, he couldn’t refuse: “I was very glad to hear from Mythic who invited me down to work on the song. I was impressed by the dedication of the developers to make WAR both a success and fun to play, something that, in my opinion, is missing from many other MMOs.”

“Kiss My Axe (While I Drink My Beer)” is the name of the tune that emerged from their partnership, and it extols the virtues of one of WAR‘s new classes, the Dwarf Slayer. You can listen to the song here. I’ll be honest – it’s pretty damn good, and I don’t really like this kind of stuff.

There’s no cowbell, though.