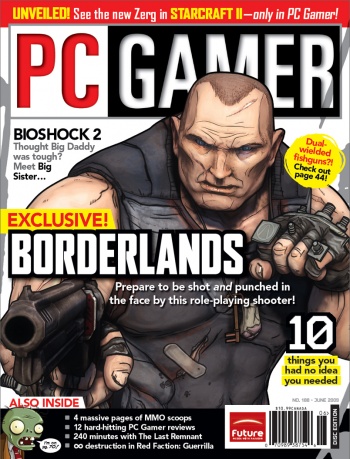 We still might not know much about Gearbox’s “Mad Max meets Diablo” shooter, but we do know that it sure doesn’t look the way it used to.

Remember Borderlands? 2K published, Gearbox developed, the game, which takes Diablo style randomized levels and weapons and mixes it with first-person shooting, surfaced a couple years ago and then really hasn’t made much noise since then.

That might be because it’s been getting a major makeover. Borderlands used to look like this. It looked good, but didn’t really look special. Borderlands, as of now, looks like what you see on the PC Gamer cover to the right. Big difference, huh?

That’s not a piece of concept art – it’s “an in-game screenshot with no post process,” according to Gearbox. Yes, I know what you’re going to say: it looks like a comic book.

So what to do with inevitable flood of angry fans who can’t deal with the fact that a game they won’t play until Halloween this year has suddenly gone with a color palette that isn’t wholly composed of multiple shades of greenish-gray-brown? Gearbox is ready for them, but they think they’ve made the right decision, all things considered.

“Though there’s always the chance some people could be turned off by the style, it was decided that, overall, it fits the game and creates a more visually interesting experience,” they wrote in a post on their official forums. For them the “game has not become less detailed or washed out at all…[the art style] stands out, and makes the gray-and-brown bleak landscapes, while still bleak and inhospitable, memorable and recognizable.”

I’m all for fighting against the browning of our videogames, but, call me a skeptic, I want to see Borderlands in motion before I’m completely sold.