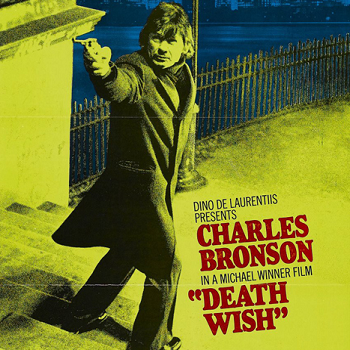 The Die Hard star may very well have found his next franchise in reviving the revenge classic.

Aside from holding the prestigious distinction of containing Jeff Goldblum’s acting debut, Charles Bronson’s Death Wish is easily one of the most iconic revenge films of all time. It’s story — wherein a recently-widowed Bronson seeks revenge on the street tuffs who murdered his wife and becomes a vigilante hero in the process — is a bullet-riddled testament to how effective simplicity can be in storytelling and the closest thing to what I imagine our nation’s elderly dream about doing on a daily basis. Even those who haven’t seen Death Wish have heard of Death Wish in one form or another, because Death Wish laid the foundation upon which the vast majority of subsequent revenge films have been built.

And the rest of the franchise? Absolute madness. It’s basically just 360 minutes of Bronson (who was 73 by the time the fifth and final entry was wrapping up) stacking the bodies of increasingly cartoonish gang members (“they killed the giggler!“) with increasingly cartoonish firepower (a belt-fed M-60 is involved at one point).

So if you found yourself casting a remake of Death Wish, because you just knew that they would eventually remake Death Wish, who would you choose to take over for Bronson? Ahnold? Stallone? Or would you go with John freaking McClane himself, Bruce Willis?

Well, if you’re Paramount Pictures, the answer is the latter. Deadline is reporting that Willis has been chosen to star in the upcoming remake of Death Wish, which is set to begin production in the summer.

Paramount and MGM are setting Big Bad Wolves helmers Aharon Keshales & Navot Papushado to direct Bruce Willis in Death Wish, the revamp of the Charles Bronson vigilante franchise that is adapted from the Brian Garfield novel.

The Israeli filmmaking team made their debut with Rabies and then followed with 2013’s Big Bad Wolves, a violent, high-octane thriller that became a cult favorite. They are repped by WME.

The casting of Willis puts the team behind the Death Wish remake in an interesting place, at least as far as their approach to the character of Paul Kersey goes. While Willis has shown no signs of slowing down in his recent blockbusters (and is set to trot out John McClane yet again in Die Hard: Year One), Bronson’s Kersey was not really a guy who engaged in the rooftop fight sequences that Willis has become known for — in fact, he almost exclusively relied on firepower to bring his enemies to (street) justice.

Considering that Bronson was 7 years younger than Willis (who turns 61 in just over a week) when he started filming the series, let’s hope for everyone’s sake that Keshales and Papushado don’t try and turn the new Paul Kersey into another unkillable, helicopter-destroying superhero. Having seen Rabies and loved it, though, I think this remake is in more than competent hands — and also, you should all check out Rabies.

As for Willis, Death Wish could very well serve as the franchise that keeps him acting into his 70’s like it did for Bronson — which again, I’m all for. I mean, does Death Wish 2: Hostile Territory starring Bruce Willis and Betty White sound as good to everyone else as it does to me?

Hearthstone‘s Next Expansion Will Be Revealed This Friday