Last week I mistakenly left everyone with the impression that I was unhappy with the way BioWare re-visits ideas and does a certain degree of… recycling. Just so we’re clear: I don’t think this is a bad thing at all. RPG games are my bread and butter, and I’m pretty much guaranteed – perhaps even compelled – to buy anything with the word “BioWare” on the cover. They make great games. And even when it comes to non-BioWare games, for the most part I’d rather play a mediocre RPG than (say) a really good action platformer. That’s just where my heart is.

Not all clichés are bad. Sometimes games re-use ideas because they’re fun. Keeping this in mind, let’s drag out a few tropes that end up in a lot of RPG games and make fun of them.

Remember the arena in KOTOR, Jade Empire, Neverwinter Nights 2, Oblivion, Morrowwind, Fable, Fable 2, and Dragon Age? You can hear the roar of an immense crowd, even though you never see any spectators. The announcer speaks with a booming loudspeaker voice, even if you’re in a primitive fantasy world without amplifier technology and they have no discernable way of seeing what you’re doing. This reached the zenith of silly in Fable 2, when you moved from one fully enclosed room to another and the unseen announcers acted like it was a television show.

It’s a great trope. You get a lot of “gameplay” out of what is essentially a single primitive room. It also lets you set up oddball fights that might be fun but would be hard to justify in any other context. A displacer moose, two dire penguins, a rabid elephant and a bullsquid? Of course those animals would work together! They were trained to! For the arena!

This one can be a little annoying if done wrong. (As in the Fable games.) Nobody likes to see their avatar suddenly surrender to a couple of mooks in a cutscene. But if the game can justify you being captured (or entice the player to choose to surrender) then this can be a nice way to mix things up for a little while. You get to learn about the bad guy – maybe even meet him – while in the dungeon, and you get some varied combat because you won’t immediately have access to your epic gear while you’re breaking out. 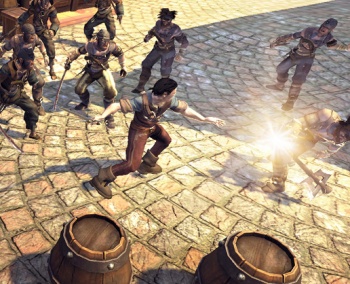 You Must Save The World… Eventually

The bad guy might be on the precipice of world domination, but he’s sporting enough to let you build up until you’re ready to face him.

Games with time limits have the problem that if you run out of time, your entire savegame is screwed and you have no choice but to start over from scratch. This tends to drain the fun out of the game. Also, it’s hard to tell how long the quest will take, so players feel like they’re being rushed and end up missing out on content, even if they have plenty of time. The original Fallout had a hard time limit, and a few players discovered the frustration of running out.

It’s nice to be able to explore the freeform world and do the sidequests without having a clock running. A good story can make the task feel urgent without actually putting a time limit on how long you have to save the world. It might not make sense, but it’s nice to know you’re free to explore as long as you’re having fun, and you’re free to move forward if you want to see how the story turns out.

The Ancient, Well-Lit Tomb With Traps That Still Work

Yes, it’s stupid. If I left my car sitting exposed to the elements for just ten years I don’t expect it would start up on the first try afterward. Yes, traps with wooden moving parts that remain functional for hundreds of years at the bottom of a damp cave are ludicrous, as are the monsters that live there without setting them off. The fact that traps of stone and wood so often seem to have optical or light-based mechanisms is more than a little goofy. And the ever-burning torches on the walls and the glowing crystals that light the place are kind of messed up too.

But screw you. Tombs and ruins are fun.

Do I Have to do EVERYTHING Around Here?

“Welcome to our town, stranger. The king has been poisoned, the well is contaminated, the princess has been kidnapped, the drawbridge is broken, the fields are overrun with wolves, we lost contact with the monastery, the merchants are all squabbling about something, the dock workers are rioting, the inn is infested with rats, there are undead in the graveyard, one of the ships is under quarantine, there’s a curse on the temple, several town guards are taking bribes, an evil mage has been kidnapping young women, a supply shipment is over a week late, the Duke hasn’t been acting like himself lately, a bad minstrel is annoying people in the town square, goblins have moved into our sprawling sewer system, widow Creekjoint has lost her cat, a priceless artifact has gone missing, and we’ve got an entrenched criminal organization that we’re all too chickenshit to fight. If you could fix all that we’d be much obliged.”

Okay. What other good RPG cliché did I leave out?

Shamus Young is the guy behind this website and these three webcomics. In Fallout, he returned with the water chip with just 2 days to spare.