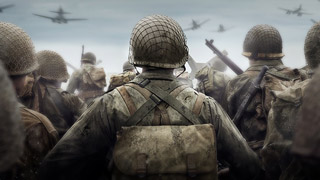 The Call of Duty: WWII private beta is coming to PS4 later this month, and Sledgehammer has released details on what’s included.

Call of Duty: WWII is a little over two months away, but the beta is almost here. Sledgehammer Games has announced the details of that beta in a new blog post.

The private beta kicks off on PS4 on August 25, and runs through August 28. During that beta, players will be able to, “Enlist in the Infantry, Expeditionary, Airborne, Armored, or Mountain Division.” You aren’t limited to just choosing one, so you try them all. The new Division system replaces the Pick 10 Create-a-Class system.

The beta will also let players check out Operation Breakout, the game’s new War Mode that drops you into a fight between the Allied and the Axis in the village of St. Lo, France.

Also included are three new maps – Pointe Du Hoc, Ardennes, and Gibraltar – and the Team Deathmatch, Domination, and Hardpoint modes. There’s a limited amount of progression, so you’ll be able to unlock a limited amount of weapons, scorestreaks, equipment, and basic training skills.

Sledgehammer says there’s a lot that’s not included as well. That includes Headquarters, the new social experience, supply drops and loot, and plenty of other content.

There’s also a second beta planned that will kick off on September 1 on PS4 and Xbox One, and run through September 4. Sledgehammer plans to show off more of the game during its Call of Duty: WWII livestream from Cologne, Germany at GamesCom 2017 on August 22nd at 1 PM ET.

You can find all the details on the PS4 beta in the blog post on the Sledgehammer Games website.

Call of Duty: WWII is coming to PC, PS4, and Xbox One on November 3.