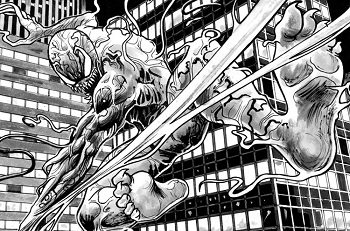 The Marvel Universe has no shortage of super-powered villains and would-be conquerors, but none are as unique as Carnage. Exposed to the offspring of the symbiote that bonded to Eddie Brock (because comics are weird), serial killer Kletus Casady became a monster that eventually crossed paths with Spider-Man and other key characters through the years. His psychopathic nature and joy of killing has caused conflict wherever he went- but this October, Carnage will set his sights on the slightly more amicable practice of hunting criminals in New York City.

It all goes down in the AXIS: Carnage miniseries by writer Rick Spears and artist German Peralta as part of Marvel’s upcoming AXIS event. Spears is a fan of Carnage, citing the character’s psychotic and extreme nature as what draws him in. “[During the events of AXIS] he lacks the core compassion a hero needs to empathize with people. He’s sort of “chaotic good,” if you will. So even when he’s trying his best to be a good guy, he’s prone to making some seriously bad — and possibly fatal — mistakes,” the writer said. He also mentioned that readers will be given a glimpse into Carnage’s past and origin in the wake of his character inversion, and that the supporting cast will be kept tight.

“We open with him trying to be a hero and failing pretty miserably at it so he kidnaps er — enlists some help from Alice, a TV reporter who he thinks is a good person and who can show him how to act like a hero,” Spears said. “The Sin-Eater is going to be our antagonist, but it’s not exactly the Sin-Eater you know. He’s back, in a new way. He still wears the green balaclava and carries the shotgun, but there is a mystery around who is really under the mask.” Other opposing forces targeting Carnage include “a small army of NYPD cops and possibly a National Guard fighter jet or two”.