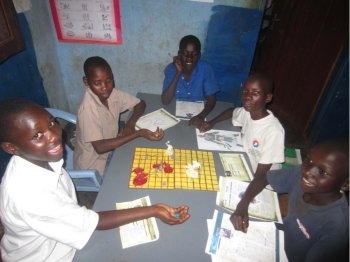 Ben Parkinson and The Butterfly Project use pen and paper roleplaying to teach creativity, teamwork, and problem-solving.

Roleplaying games like Pathfinder and Dungeons and Dragons can be accessorized with miniatures, grids, and other doodads, but all you really need to play is a few dice and some pens and paper. Working with children in Nigeria, Ben Parkinson realized that the minimal materials required for roleplaying made it an ideal game for remote villages and for disadvantaged youth in cities. “Children in slums have very little inspiring to do and I felt that these children I was beginning to get to know loved the creativity of monsters and were going to benefit from seeing themselves as heroes, when poverty eats away at confidence to be able to effect change,” says Parkinson. Parkinson started a roleplaying group in Uganda in 2010, beginning with 4th Edition D&D and later switching to Pathfinder. Soon, one of the youth members of his roleplaying group took over as GM. Today, there are six GMs and about thirty youth participating.

“I am a fan of 4th Edition and the brightest kids enjoyed the complexity of the battles, though I felt that the game was not achieving my purpose of trying to stimulate creativity, teamwork and problem-solving, as the game was orientated more towards combat,” says Parkinson on the Paizo blog. Parkinson began using the Kingmaker adventure path to further challenge his young leaders group. The Kingmaker adventure path puts adventurers in charge of developing and defending a new settlement. “Their enthusiasm inspired me to think more broadly and so I wondered whether we could work with some of our potential changemakers and social entrepreneurs, seeing whether we could run a more challenging thoughtful group, where they were making more human decisions, which might help them in their own development as leaders,” says Parkinson. Each player took on responsibilities for the settlement, including mapmaking, record keeping, rationing, and city statistics. After an encounter with bandits where one bandit joined the players against the others, they began seeing adversaries as possible allies to improve their city.

“Kingmaker has been a backdrop, though, to an explosion in interest in roleplaying. We now have six GMs and perhaps 30 young people starting to participate in roleplaying here, so we are trying to figure out how to use what resources we have to develop an RPG timetable. Brian (a member of the young leaders group) is also running a group entirely of girls and he has taken them through “The Deadly Mine” and I hope he will start them on Pathfinder Society Organised Play.” Parkinson’s next project will be to take GMs into remote Northern Uganda, to continue to use the game to help build confidence, creativity, and problem-solving skills among the youth there.