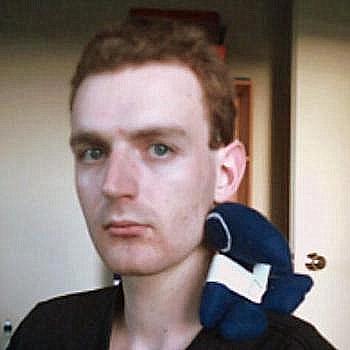 If you’re an Escapist regular, or have spent even a little time poking around our forums, you’ve probably noticed that Role Playing games are big here. Every day, users take up words and band together in pursuit of a shared alternate reality. At least a part of that is made possible by CounterAttack, a prominent on-site role player.

CounterAttack is a 20 year old New Zealander that spends most of his time Skyping with friends and hanging out around The Escapist. You might have seen him lurking around the forum, updating his Roleplayers’ Index & Digest Thread. What you might not know is that he’s a Latin and ballroom dance enthusiast and enjoys making his own custom plushie dolls, too.

Recently we had the chance to sit down and ask him a few personal questions. Here’s what we found out!

How long have you been a member of The Escapist, and what first brought you here?

I joined The Escapist back in 2008. Like many others, I was lured in by Zero Punctuation back when I was younger and stuck around for everything else as well. My interest in role-playing didn’t come up until November of 2009, so I mostly lurked until then.

I lean more towards Star Wars, largely because I know a bit more about the setting compared to that of Star Trek. Most of my Star Trek knowledge comes from a mix of The Next Generation (which I haven’t watched in years), and the movie that was released a few years back. Again, haven’t seen that in a while.

When a conversation turns to Star Wars, however, I can quite happily join in and make comments on most topics. It does occasionally require a bit of research on my end, though.

We hear that you write fiction, how did you get into that?

Honestly? My writing started as a spur of the moment thing. I checked out Forum Games and RP on a whim (this was long before the two were split), and began reading over a couple of threads that I liked the look of. A quick conversation with the person in charge of a role-play inspired by Battle Royale got me in as a late entrant.

Over the years, I’ve been improving my skills as a writer with (almost) every role-play I join or start. I will say, though, that every writer has their weak points, and mine is coming up with a story or plot for the characters to follow. I’ve been trying to improve on that, with a bit of success.

Can you tell us a little about your RP Digest thread?

Back in the day, the RP Digest was originally run by Susan Arendt, if I remember correctly. After the Digest stopped being updated, I noticed that Claymorez was running a thread dedicated to keeping track of active role-plays. I offered to take over and he accepted.

I expanded a bit more on the basic list of active threads, and encouraged more people to add their own role-plays to the Index. At one point, I conducted a series of interviews with a handful of people who ran role-plays of their own. That proved to be an interesting insight into how other people run their threads.
Since then, I’ve handed over the Index to RBMidknight, a friend of mine who keeps it in working order.

Where do I begin? The comedic brilliance of LoadingReadyRun, plus Feed Dump and Unskippable; the insanely talented Miracle of Sound; the Hexproof column for its commentary on my favourite card game; and of course, the friendly Escapist staff.

I think I’ll have to pick LoadingReadyRun, out of all of the above. There are some days when I need a dose of comedy to get me through the morning.

What do you like most about Role Playing communities?

Most role-plays will often form their own little sub-group, often an Escapist-based usergroup or a Skype conversation, in which to talk casually and discuss things like the story or potential character development. It’s that kind of thing that I enjoy just as much as writing alongside others: communication. Knowing the people you’re working with and being comfortable around them is one of the keys to a successful role-play, I think.

Ordinarily I don’t pick favorites, since I find that choosing one above all else tends to put an emphasis on that one rather than consider them all.

However, since you asked, I think I’ll have to say NeoAC‘s The Road To Indigo, a role-play in the world of Pokémon. The character I wrote up for it, a Pokémon Trainer by the name of Rochelle Sanders, has quickly become one of my characters that I enjoy writing for the most. Although the story hasn’t yet progressed as far as initially intended, Rochelle has quickly become an interesting and well-written character, at least to me.

Who is your favorite fictional character and why?

From any fictional source? Eek. This is a tough one. There are a lot of options, especially if I want to include my own characters. Among my own creations, I don’t think I can really claim a ‘most favourite’. When I create a new character, I almost always put a lot of thought into them, thinking over how they will shape the story and the other characters in their own way. In a typical role-play, the player-characters will often be in the same group, team or general area. Everyone has an effect on all of the others at some point or another.

Outside of The Escapist, though, I think I might have to say… well, as with the comment above, I don’t have a favourite. I spend a fair bit of time reading, watching movies and playing games, so there are too many good options to pick from.

There are a fair few games that hold a special place for me. In particular: Bastion (for its exceptionally clever story-telling and beautiful soundtrack), Pokémon Black Version (despite its linearity, the story was a good one that challenged the norms of the series), the first Mass Effect (taking cover during a firefight was entirely optional and that was the way I liked it), and Command & Conquer: Red Alert 2 (over ten years old and it’s still as entertaining as ever; it hasn’t aged a bit).