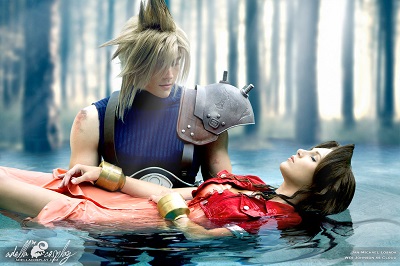 A recent cosplay shoot has given life to one of the Final Fantasy franchise’s most memorable moments.

For many Final Fantasy fans there’s no moment in the series more iconic than the (Ancient Spoiler Warning) death of Aerith in Final Fantasy VII. Unexpected and shocking, it was made doubly effective the game’s use of cinematic cutscenes that, at the time, were unlike anything many players had ever seen. It’s been nearly 20 years but the franchise has arguably never again produced a moment as famous or poignant. It should serve as little surprise, in turn, that some fans have gone to sometimes incredible lengths to pay tribute to the scene and the game.

For all of the tributes we’ve seen over the years however, we’d be lying if we said we’ve ever seen anything quite as impressive a recent set of cosplay images. Shot by photographer Jan-Michael Losada, the pictures in questions recreated Aerith’s famous aquatic burial scene. Aerith and Cloud were portrayed by veteran cosplayers Sarah “Adella” Quillian and Wes Johnson. Quillian also designed her costume while a team of several others assisted with other elements of the shoot.

While the initial shot of Cloud holding Aerith is quite lovely, the truly impressive images are arguably the underwater shots for which Quillian had to literally sink down into a pool of water. “Underwater requires that you trick your brain to push past the point where it is demanding you return to the surface for air,” she said, commenting on the photos. “The position I had to be in, in order to sink slowly to the bottom of the pool, also allowed water to flow up inside of my head! It was definitely an exhausting day, but I’m so happy with how the photos turned out!”

It’s perhaps worth noting that this isn’t the first time Quillian’s portrayed Aerith. While her previous takes on the character were perhaps less dramatic than this latest one, they’ve all been quite excellent and you’d do well to give them a peek. In fact we’ll go ahead and recommend that you check out all of her cosplay work and maybe even stop by her Patreon if you feel so inclined.
Source: DeviantArt